Over the decade ending 2017 sales of pet care services doubled to a total of $5.8 billion. These services include grooming, boarding, training and pet sitting and not veterinary, horse boarding, pet transportation, foods or other pet supplies. There are over 100,000 pet care business in this sector, an increase of 60% since 2007. Read the full article by using this link.

Our investigation determined mobile groomers face up to a week unable to work while new converters are installed. Some vans are equipped with two. Installation parts and labor for one converter ranges from $1,000 to $2,250. 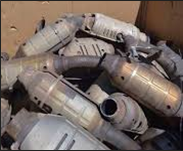 Mobile groomers are not being singled out. Catalytic converter thefts are on the rise nationwide. Precious metals, especially rhodium, can be extracted by thieves and sold. When you consider the cost of rhodium has surged to over $10,000 an ounce it attracts theft from easy sources. Stealing one can be done in as little as two minutes. Precious metals are inside a converter’s honeycomb filter small enough to hold in the palm of a hand.

Thieves make a few cuts to remove an entire converter, and run. Later they remove the precious metal laden filter.

Accessing converters is easier on commercial vans, like those of many mobile groomers because of their height from the ground. Thieves easily roll under, make cuts and run. Commercial vans sometimes have two converters making them even more attractive to thieves.

Currently (2020) the precious metals extracted from one converter can bring thieves $50 to $250.

Groomer 411 News brings pet groomers news in a whole new format about their industry and developments even worldwide. For the most part it is news that few groomers hear in most social media. Take a look at some of the posts below to see a variety of topics. If you like what you see please consider subscribing using the link above. You can always discontinue later.

We are a service of the people that bring you the blogs of GroomWise.com, and we have been members of the grooming industry for as long as 61 years working under our author and founder, Madeline Bright Ogle. Maddie wrote the best selling grooming business selling over 25,000 copies, From Problems to Profits in Pet Grooming, and owned one of the world's most profitable pet grooming businesses under her management system described in From Problems to Profits. See www.groomingbusinessinabox.com.

Senate Bill 20-142 (Colorado) is in committee. Hopes are high for its passage but chances are nowhere near high. Calida Troxell says, “They may kill it but people in my industry are being preyed upon by this body...getting this bill written is a huge step in-and-of-itself to just them know that we are starting to unite.” She is the owner of a grooming and boarding property. She says the Pet Animal Care and Facilities Act (PACFA) has created a burden on many smaller independent operations like hers. Major providers such as Rover.com were able to become exempt from PACFA fees while independents like hers have not. She says S.B. 20-142 levels the playing field fairly for all service providers big and small governed under PACFA.

To read the article, use this link. CLICK HERE.