Sometimes a bruise is more than a bruise! 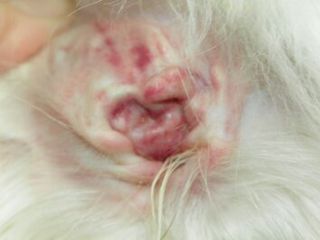 Thursday Ashley called me into the bathing room to look at a dog that she was bathing. There were several small red dots on her belly and some smaller (unde rthe size of a nickel) bruises on her leg, and a few in her ear, similar to the one in the photo above. I was concerned and told her to get her dry after she was done and I would look at her then.

By the time she had her dry they had already spread, and were now the size of a quarter and there were more coming out on her body. Of COURSE I called her mom immediatley, but we both decided since she was at a doctors appointment of her own (she has cancer) I would just finish grooming her and she would call her vet.

By the time I was done grooming her her ear flaps were purple along the entire edge and the bruises were much more prevalant and getting darker.

Her vet had told her to bring her in as soon as she could get her there.

She has a condition called Thrombocytopenia.She is being treated with vitamin K, prednisone and two or three other medications and being closely monitored.

The vet said had she gone home and not been treated she likely would not have made it. 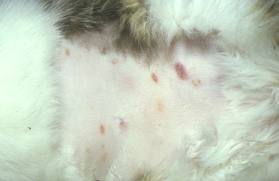 So knowing what to look for may have saved this puppies life.

Bruises that come on suddenly for no known reason and spread qucikly, getting deeper in color in a short period of time need treatment as soon as possible.

Bruises that come about with no injury and maintain shape and size should be monitored, but if you are concerned a visit to the vet is advised. 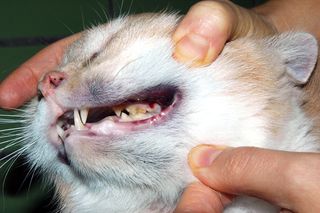 Bruising in the mouth or along the eye rims should be referred to the vet asap.

There are many different reasons that bruising can occur, and many are benign, but in other cases it is a matter of life and death!

Because we concentrate on skin and coat of the dogs and cats we see we are much more likely to see the bruising than the owners.

For more information on illnesses that cause bruising in dogs, go to More information or ask your vet for insight on what to look for and when to refer pets to their doctor.

We are the first line advocates for our pet clients. You can save a life.

I had this exact thing happen to me. I went to a new client appointment and one of the things they told me upon intake was they were using me because the dog came back with bruising after using the previous groomer. I thought it was odd but didn't go much past that. After prepping and bathing this dog I noticed bruising starting to appear between the eyes where I had scooped out hair, and various other places. This was on a Thursday. Told owner to take it to the vet. Don't wait the weekend. They took him in that Friday morning. Vet told them he wouldn't have lasted the weekend. The sad thing about this story is I don't think they ever told the previous groomer about the bruising. They just assumed it was their fault and switched groomers.