This is Chloe’s story as reported to me. It is sad and I have to warn you, it is disturbing in so many ways it may make you totally rethink the way you operate your drying facility. It has me asking questions that I cannot answer about dryers in general.
To begin with, on Sunday, January 31, 2010 I was checking my email when I saw a subject that made me do a double take. It read “Chloe, horribly burned at groomers”. Let’s just say that got my attention FAST. I opened it and was horrified at what I saw and read. Over the remainder of the afternoon I exchanged several more emails with the person who found my blog when researching burns on pets. After the incident, a friend of the family (the person who emailed me the story) came over and took photos for them and is assisting the family in dealing with this. She asked me to write the story and inform groomers of the incident, as she has decided this should never happen to another dog. I agree 100% that it should never happen again, but I also feel like it should never have happened in the first place.
I am confident that this injury is legitimate and I am confident it didn’t have to happen.
WARNING!!!  The photos below are GRAPHIC and are used with permission.
One day last week, Chloe, a rather small yorkie, was dropped off at a grooming salon that she usually goes to with no problem. Everything went according to plan as far as the owner knew. They picked up Chloe and she was groomed but she had a horrible odor they couldn't pinpoint. When they got home, they realized she was limping slightly, but she took off upstairs and ran under the bed before they could investigate further. A relative came by and went to retrieve her from under the bed and she yelped like something hurt. Upon further inspection they discovered an area of red dots that looked like pimples on her chest. She was not acting really sick, so they watched her. The spot got larger and weepy as time went on, and she got lethargic and refused food and water. At this point the family felt they needed to go to their vet. He was in surgery but advised they not wait and take her to the Emergency clinic.
She was diagnosed with a thermal burn. Here is the photo of the injury, a couple of days after the grooming. 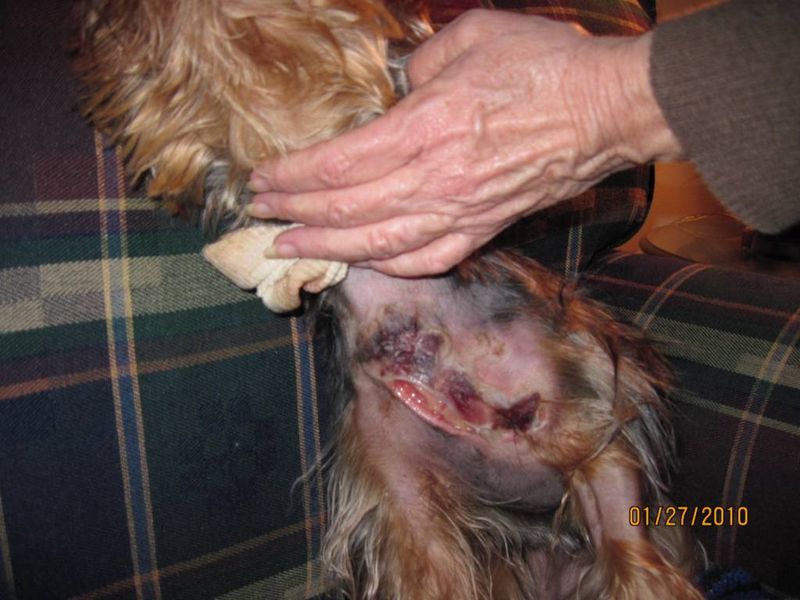 The only thing Chloe had done that day that would have caused this type of injury was go to the groomers. 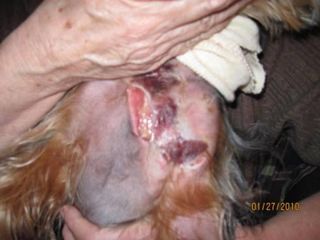 What at a grooming shop could cause such a burn to occur you might ask? Simple: a heated cage dryer or a stand dryer that has heat being used as a cage dryer. These dryers have temperatures that reach up to 155 F according to the manufacturers and since that heat is enough to do severe damage to skin with short contact time, imagine what prolonged contact can do. Can you imagine being in a closed box with that type of heat being blown on your skin? I can't and I cannot understand why groomers still use this type of dryer!
The groomer was shown the photos by the family friend and was visibly shaken. They had no idea there was a problem with the groom. The thing to note is that according to my contact, the grooming, drying and bathing are all done in the same room at the shop in question. They do use heated cage dryers and it is believed that this is what caused the injury to Chloe. According to the shop owner Chloe never made a sound or acted like she was uncomfortable.
I have a hard time believing that a dog would not make an effort to try to get away from a heat source that is burning their skin. You would imagine that at least as the burn was beginning to occur the dog would be whining, scratching or barking. After the burn set in deep in the tissue, pain would be diminished as nerve endings are damaged, but at the beginning, there are signs. Likely the signs were tuned out or ignored as a normal fussy dog. In this case that decision may result in deadly consequences.
Chloe is scheduled for her first surgery this week. They had to wait until she was stable to perform the surgery. From my experience with burns, they were likely also waiting for the skin to finish dieing off. She will likely need more surgery, and possibly skin grafts to cover the area damaged by the burn.
In Chloe’s case, I FIRMLY believe the burn could have been caused by a hot dryer used on a metal cage. The metal cage bottom gets hot and holds the heat that is being transferred to it from the heat dryer. It never cools off and transfers its heat into the dog’s skin. A yorkie, with thin hair, has no insulation from the heat and the skin damage caused is deep and traumatic. I have seen Vari Kennels melted from the heat of a dryer! Imagine what they can do to skin over time!
I do not believe anyone WANTS to injure a pet, but when equipment is used incorrectly or by people not paying attention, injuries happen. A heated stand dryer (pointed into a cage and used as a cage dryer), or a cage dryer on Medium or High in an enclosed area creates an oven. Cages that are covered, surrounded or enclosed fit that bill. It is an accident waiting to happen.
Many groomers do not think that the dryers they are using can cause damage to the skin of the dogs. We need to rethink that position. We need to educate groomers and bathers to the dangers of the dryers we use daily. Unless we KNOW that they can kill, and either never use them or use them extremely carefully, then more dogs will get hurt or die as a result of their use.
In the next installment of this series I will discuss the way burns occur and then in the third installment we will discuss ways that heated dryers can be useful when used correctly and alternatives to them that are safer and more effective. I will also have an installment on what cage dryers actually ARE and when they become a problem because many people thing cage dryers are all equal and nothing could be further from the truth!
My goal is to educate as many people as possible to the effects of these dryers in the hopes of another pet never having to go through this.

This makes me physically ill.
How can a "groomer" call themselves a groomer, when they don't care enough about dogs to protect them like their own?
I work for a PetSomething. I am dedicated to the animals in my care. It breaks my heart that someone would open up their own salon, or work for one, but not be cautious or caring enough to even use common sense safety procedures!

I am sorry to be so emotional but yorkies are (by far) my favorite dog. I have over a hundred that ask for me by name. And when I saw the pictures, I just couldn't help but cry. I'm sure this story will open eyes for everyone who sees it. Groomers with no common sense will say "wow I guess I learned something".
Owners will say "OMG you aren't using heated kennel dryers on MY dog are you?" (And personally, if an owner did say this to me, I would honestly say "no ma'am, our kennel dryers aren't heated, and we can't even USE kennel dryers on yorkies along with many other breeds."

I guess it is just shocking that anyone who's used a heated dryer (a high velocity one for instance) hasn't FELT that heat. I mean what groomer hasn't thought to themself DANG that sucker is getting hot, as you dry a dog from start to finish after a bath.

I hope and pray this was some horrible mistake done by someone who was new and STUPID. Now I'm getting mad...