Home This Blog's Archives Author's Website Select Another GroomWise Blog GroomerTALK Community
Building your own SAFE dryer cages
To Back Brush or not to Back Brush that is then$64,000 Question.....UPDATED!

Yes, you DO show grooms!

I hear this every day on FaceBook groups:”I just groom pets” or “my clients don’t want a show look. Tell me how to groom a Westie in a pet trim”. Then there is this line: “I asked for pet trims and you showed my hand stripped show dogs! How is that supposed to help me? I ONLY GROOM PETS!”

The reason this tickles the daylights out of me is that in many cases the ONLY difference between a show trim and a pet trim is the length of the hair and the technique used to achieve that look.

I also hear all the time that there is no right or wrong way to groom a dog, that the client’s expectations are the most important thing, not whether the pattern is correct or not. I call BS on that! YES client expectations have to be met. YES their preferences for shorter skirts, beards, eyebrows, legs should be fulfilled. But I have yet, in 20 years of grooming, to have a client say to me “I want my dog groomed wrong”, “Don’t blend it that is wrong” and the myriad of other things I hear groomers say every day online.

When a customer comes in with a schnauzer for example and it has been groomed incorrectly, with no blending, with the facial lines set wrong, or something else majorly incorrect I ask them “Is this what you asked for or can I make it more to breed standard the way it SHOULD be done”. Most are surprised that it is incorrect. Once in a while someone will say “Yes, I wanted no skirt and the face take really short” but those are few and far between, and the vast majority look at me and say “I didn’t know it was wrong, it’s the way the groomer always did it”.

SO because their groomers always did it incorrectly, they assume the way it was done is right. That said, I don’t just groom the dog my way. I always clarify with the client that this is incorrect, and can show photos and books to back me up. I believe that if you just fix the cut without explaining it to the client you are setting yourself up for failure. They will assume you don’t know what you are doing if you do that. Why? Because they are used to it being done the way they see it. The way they are used to is the way they assume is right because they think all groomers k now what they are doing. And we should, but that is another story.

Now we need to discuss WHO says something is right or wrong, because that it he next thing people say when told their way is wrong. WHO SAYS It’s wrong? WHO SAYS my way is the right way? That is simple! Every grooming book ever written. Breed clubs. Certification organizations. That’s who! Not ME. Not the groomer across the street who wants to make you look bad, the people with the real power and the real knowledge say there is a right and wrong way to do it. SO argue with them not me.

I also hear “well when did the pattern change???” In most cases is never changed. I can show you old photos and books from the early years of pet grooming and they are the same as they are now. So what happened? My theory is that someone who was taught wrong or simply liked a different look taught someone else, who taught someone else. AND as a result everyone is taught wrong. In the 60’s, 70s and 80s before there was internet there was no real way for people to know right and wrong other than to go to an AKC show, but today there is no excuse NOT to know the difference with all the resources available to us these days at the tips of our fingers. Most breed clubs have charts online that discuss pet and show trims. Photos are available for the searching and it’s all FREE! No excuses anymore.

Now, let’s discuss the most commonly made mistakes when it comes to grooming particular breeds we see in shops. There are certain aspects of breed clips that are done wrong across the world because people were taught incorrectly or just never took the time to learn differently.

For example, when grooming a Schnauzer for a pet owner you will use clippers not strippers and the coat will be shorter (more like ¼ inch on the jacket and an inch or so on the legs) than on a show dog (1 to 1 ½ inches on the jacket and maybe 2 inches on the legs) but the pattern? THE EXACT SAME! There is no such thing as a show pattern, or a pet pattern. There is ONLY a SCHNAUZER PATTERN!

Same applies in Westies, Scotties, Cairns, Cockers and even in double coated breeds where to show you do not tighten up very much but pet owners like it tightened up. It is the same outline. The same lines. The same “pattern” if you will applies regardless of what many groomers think.

For example: Schnauzers, regardless of whether they are clippered, thinning sheared or stripped have the same basic lines for their “skirt” or ore correctly worded “fringe” or “undercarriage”. The line will set itself automatically where it falls off the dog naturally. On fatter dogs, that may be higher than a well-built dog, but the line will set itself where the clipper falls off the dog’s body. The same applies to cocker spaniels, only it’s the widest part of the dog’s body for cockers, and the clipper will fall straight to the table naturally in most cases.

As you can see in the photos below of a correctly groomed schnauzer, it matters not whether it is done by hand stripping or clipping. The pattern is the same. 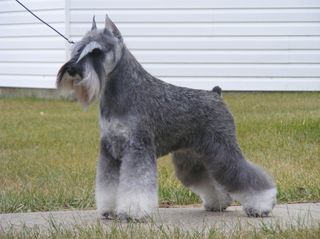 AND the same with a westie: 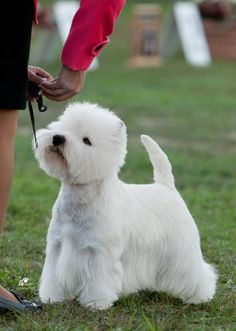 notice that the lines are essentially the same on the show dog and the pet. The shorter legs and skirt on the pet make it much more manageable for most pet owners. 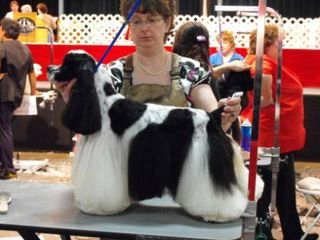 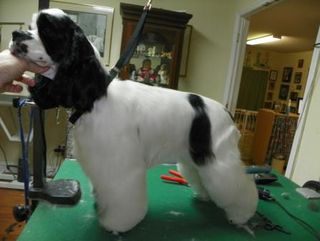 It doesn’t matter if the dog is a pet or show dog, if the client asks for a westie, schnauzer or cocker trim it gets a trim that is the show trim EXCEPT for the length.

NOW< I will admit, that show dogs we adjust each line to their bodies to accentuate a chest, add depth where it’s needed, narrow a wide chest, or lengthen a neck. You don’t need to know all of that (but it will come to you if you have an eye for grooming) but the patterns are basically all the same.

If you really want to be good at this career you want to know how to groom a breed correctly. YES you can tweak the groom to the client’s preference. YES you can make adjustments to the “correct” pattern to accommodate a dog’s lifestyle but it is imperative that you know the correct way to groom a patterned dog when asked.

absolutely love this!!! So true on every level!