Shoulder surgery is he##!

I had a really intensive shoulder surgery done on October 15th. Recovery is going to be long and slow, as long as January before the sling can come off completely. And it may be spring before I can actually groom again (and even then I am not sure how good my quality will be for quite a while).

I WILL be publishing some blog posts along the way as well as working on my book (SHHHHHHHH It’s a BIG SECRET!) along the way but currently I am restricted from using the arm without a sling, which makes typing nearly impossible.

In April I started having pain in my arm right above the elbow. An odd place to have pain according to my massage therapist and general practitioner. We tried everything from TENS therapy to physical therapy and anti-inflammatory medicine.

My arm kept getting weaker and heavier. That was our indication that something else was wrong, so I stopped Massage altogether and we did an MRI which showed I had severe damage, concentrating on the bicep tendon attachments at the shoulder. Those appeared to be shredded.

SO I then went on the hunt for the best surgeon to do the repairs. I found the best one in the area had the longest waiting time, but I decided to wait the full 8 weeks for his first new appointment slot. I could have gotten in sooner with a “lesser” surgeon but really decided that the better surgeon was worth it since this is my livelihood at stake.

The general practitioner had all the testing done the surgeon was going to need done before I went into his office for the first time. MRI. Blood work. Xrays. Everything. SO when I walked into his office, Dr. James Scott was able to say THIS is what is wrong and THIS is what we do to fix it, and schedule the procedure that day.

It turns out I had Arthritis Shoulder Impingement, Torn tendons (5 smaller tears in the rotator cuff and a Bicep Tendon that was –in his words- shredded like a blown tire at Nascar), and many other small tears and things I needed to have repaired.

The shoulder Impingement (genetic in nature due to badly shaped bone) caused the tear in the Bicep tendon, and the Bicep Tendon being ruptured is actually the reason why the other tendons tore the way they did. It caused severe instability in the shoulder joint which caused the tendons and muscles to tear.

We were prepared for 1.5 hours of surgery.

Now I began getting ready for the surgery at work and on my blog, trying to get ahead of things, like bandanas, some little posts to make and getting ready at home as well, buying front closure bras, button up or zippered tops, and getting extra pillows.

I want to share you a few photos of my MRI to allow you to understand to a degree what has been done to my shoulder and will work on a blog post detailing what happened and how it developed to this point. 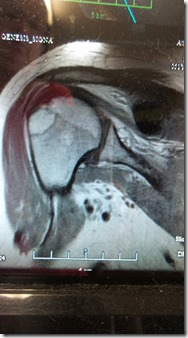 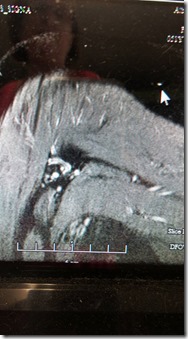 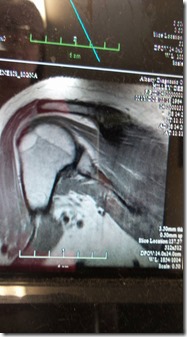 I realize that many of you cannot read those slides, but what they show is a series of severe tears in the shoulder tendons and muscles and a Misshaped ball joint that is the general cause of those tears.

Upon surgery there was more damage than they actually thought and they discovered I suffered from Thoracic Outlet Syndrome as well. That is compression in the collarbone area and is usually caused my leaning over and bending over, causing swelling and (again) Impingement in the nerves that run through that channel causing reduced blood flow and nerve damage to the hands and neck. In fact it mimics Carpal Tunnel. SO add that repair in and it becomes a 2.5 hour surgery.

I am going to be out of work for several months. In a sling for up to three. Therapy is just barely beginning with passive assist therapy to lift the shoulder and prevent it from becoming frozen. After the bone heals therapy will begin in force and I am sure it will be draining and painful, but it’s necessary to get back to working in the shop.

The chart below shows how the bone can tear the bicep tendons. When those are no longer attached the arm can still function because the other muscles and tendons ”pick up the slack” and do the work, but it will over time, become harder and harder to do. 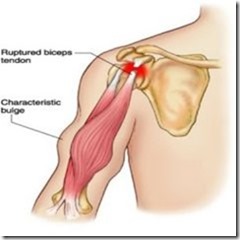 The chart below is exactly what I felt like. I had very little pain in extreme areas, and could fasten a bra and reach overhead with no problem, so my doctors didn’t think there was anything torn or ruptured when in fact there was some major tearing after all. 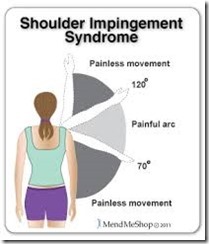 Much of this with my shoulder is genetic and getting older. However, some of it is grooming related. The repetitive motion of clippering and brushing every day. Lifting. Pushing. Pulling.

Tables and tubs that did not adjust for years added to the Thoracic Outlet Impingement.

SO my advice to you is t his:

If it hurts FIND OUT WHY!

Utilize massage and chiro to the furthest extent.

Use a bather/dryer if possible.

Use shears that fit your hand.

Use sprays and shampoos to do the work for you!

All of the above will help you prevent many of the problems that I am dealing with. WIth my genetics, I was definitely at a disadvantage and was predisposed to have this problem, but it vcan occur with those of us WITHOUT the other problems as well.

I hope my story has helped someone eliminate an issue or diagnose one.

I really appreciate all the kind words and get well wishes from everyone and will kepe you updated as we go along.

I will try to post a blog periodically as we go along, but be patient because its hard to get videos and photos when I cannot work as it stands now.

Thanks again! Be back soon!