MY secret weapon for coat care

People ask me all the time, what do you suggest for dematting? conditioner? Shampoo? and the answer that comes up every single time is Stazko. Simply Stazko. It works on every coat. Curly. Double. Long, short, straight, even wirey hand stripped coats. I have never seen a product this versatile but here it is. My secret. I am sharing it with you! He has started a new website recently and the product is now more widely available than it has been in years. Buy Here

I met John Stazko at the NDGAA Fun in the Sun in Cape Canaveral FL in 2002. I was competing with a cocker and having a had time with static and hair growth (because static leads to matting). Cheryl Purcell told me to go talk to John, that he had a product that would help so I did. I was immensely skeptical and even more nervous because I was competing the next day and changing products made me nervous. Also, we have all heard that there is "miracle product" only to have it become either a flop or a major league disaster. When you are competing you cannot afford to take the risk.

John talked to me, explained that his product, a shampoo and spray at that point I believe, were designed when his black cocker spaniel was going out in the wet Florida grass, and was getting matted in a day or so due to that and how he and his (now ex) wife didn't have time to brush and dry the dog every day. the spray, he explained, helped strengthen the hair and protect it from matting due to sealing the cuticle with silk proteins. He also added that the two together (shampoo and spray) worked best because they contained the same ingredients and would enhance each other. 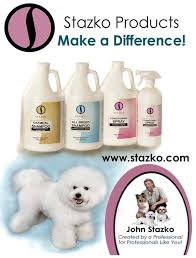 Now, I was still unsure. I mean, what I had been using on Austin was OK. BUT OK wasn't going to win any awards. I was not willing to risk it at this show and had every intention of buying some Stazko to take home to use but not to use for that day. Then, John said to me "Take a gallon of shampoo and a bottle of spray. If you don't like it, you don't pay for it." I was floored. No one had ever said anything quite like that to me before. He as guaranteeing my satisfaction. What did I have to lose besides the trophy I was trying to get???

I was a sucker for free stuff then (Still am) and said I would try it. I had 24 hours to get the dog bathed dried and I would have time to redo him the next day if I wasn't happy, so I went back to my hotel room and bathed him, dried him and was shocked. LITERALLY SHOCKED at what he looked like. He was white. STUNNINGLY white. He felt good. I mean REALLY GOOD. There was no static and he dried quickly, even in the Florida humidity. Top it off??? I loved the smell. I was hooked. I redid him anyway the next day and he was even better that day. MORE white. MORE black. Softer. More control.

I went back and paid for the product before the competition. I went on to get my very first first place that afternoon and ever since that day I have used his shampoo and spray on every single competition, show and pet dog that has come into my shop. I use it on my own hair as well and that time my hair was down to the middle of my back. It is made with cosmetic grade ingredients and it showed on my own hair. No damage, no split ends, nothing. Just really clean, soft hair. 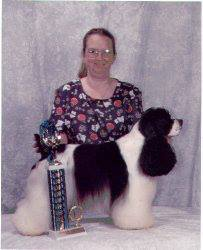 As time went on he developed an oatmeal shampoo (which became my go to in my salon for every day use), an  ear cleaner and a conditioner. ALL Of them are amazing. The oatmeal is made with Oatmeal protein, not colloidal oatmeal so it conditions it does not dry out and it CLEANS so well nothing else is needed previous to using it.

For a while, the product was out of production. I remember hearing a rumor on a forum online and I made a call to Allison Franklin at the Groomers Mall asking her...she confirmed it and sent me everything they had in stock. I bought every single gallon. 16 ounce and 32 ounce of the spray I could find, along with every gallon of shampoo I could find from any source it was available through. I was panicked when I was told it was not being made any more!!!! I mean, I was so dedicated to this line and was having the best results I had ever had! I had to stop using it in the shop except on special coats and relegated it to my own hair and my own dogs.

Then, one day, and I knew it was coming, I opened my last 16 ounce of shampoo to use on my cocker Kermit. I am not exaggerating. I was very upset. Then I got a call from Allison at The Groomers Mall that Stazko was back. I almost cried and I am NOT kidding you. I was so happy. I mean I literally had no idea what I was going to do without it. I did not know what else would work as well.

This shampoo line is the culmination of a long and storied career of an industry legend. He is a fabulous teacher and he is dedicated to making the best products possible. He is a pioneer in the disclosure of ingredients.

Below you will see the photos of Charmer. She was a dear dear dog and many groomers who used her loved her. In these photos you will see how she grew and how her coat improved over a year. She had been clippered to begin with and her coat grew out to be a natural, hard back. If you are unaware, white cockers grow insanely slow, but notice how she grew about 4 inches in 1 year. 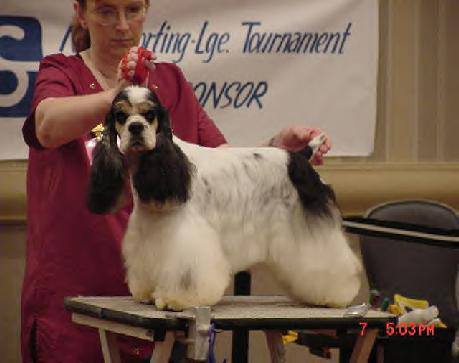 This was taken at the Atlanta Pet Fair in 2003. She was my back up dog. Austin was in fuller coat and better condition but he was under state ordered quarantine for biting me during a dog fight the day before this competition took place. She was growing in from a total shavedown with a ten blade and was only 5 months out from that shavedown. 1st place B division. 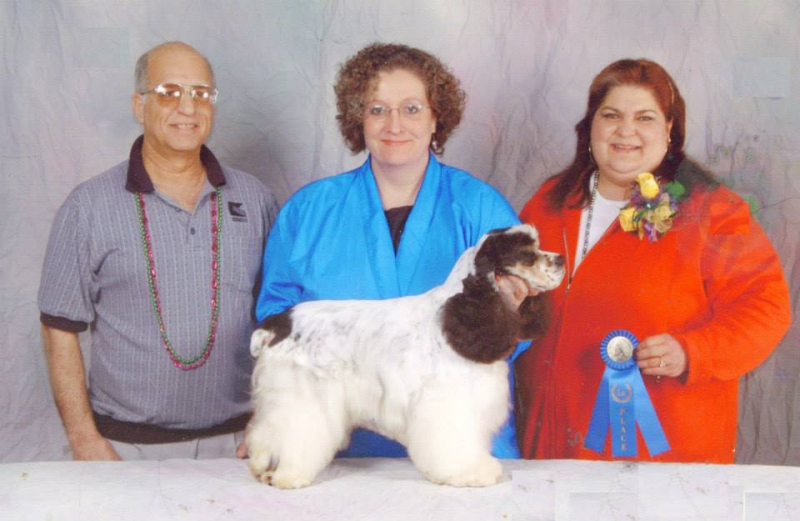 Daryl Conner and Charmer in Biloxi, January 2004. Notice not a lot of length in coat change but we were just 3 months into using the Stazko on her. 1st place C division. Photo courtesy of Glamour Pups. 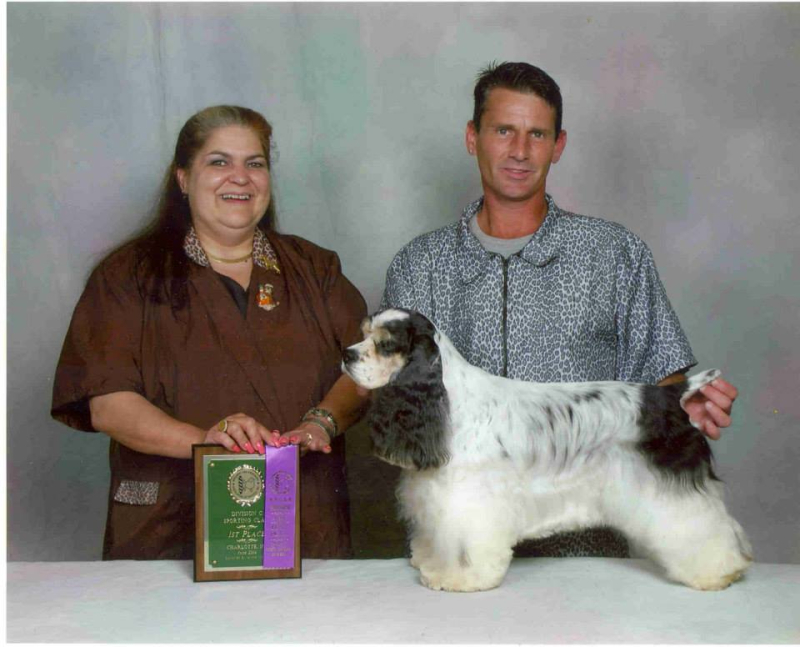 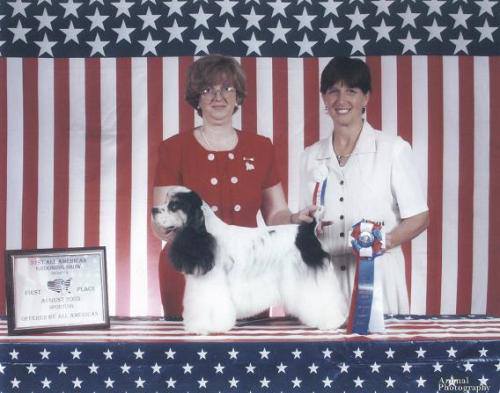 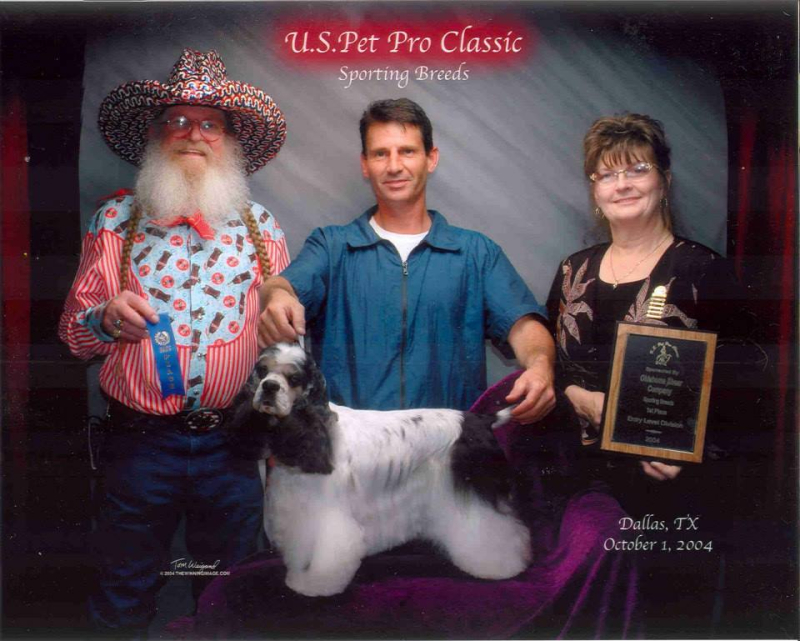 There is another photo of Karen Tucker using her in the NDGAA FITS show in October 2014. FIrst place A Division. 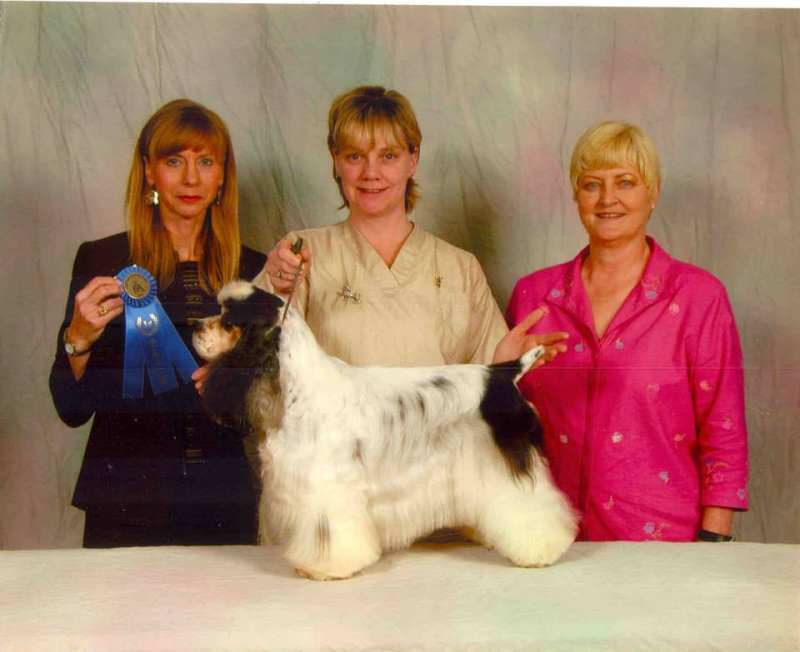 AND here is my last photo of her with Cheryl Purcell at Biloxi show 2015.

If you notice, her coat got longer and thicker as well. She was an awesome dog but had to have an emergency spay after this competition due to mammary tumors and we never successfully grew her out again as I had other dogs in play. She was groomed by 5 groomers and got 7 first places.

I also used this shampoo on every other competition dog I ever owned from that point on. 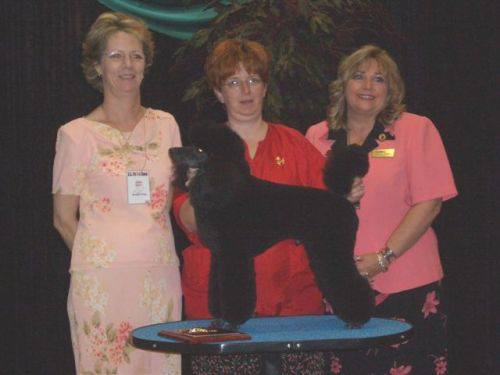 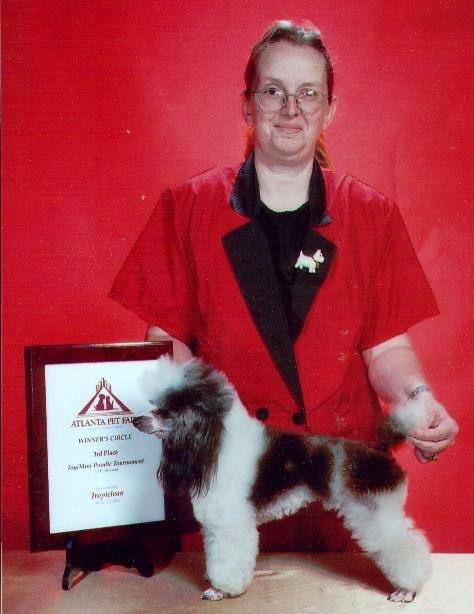 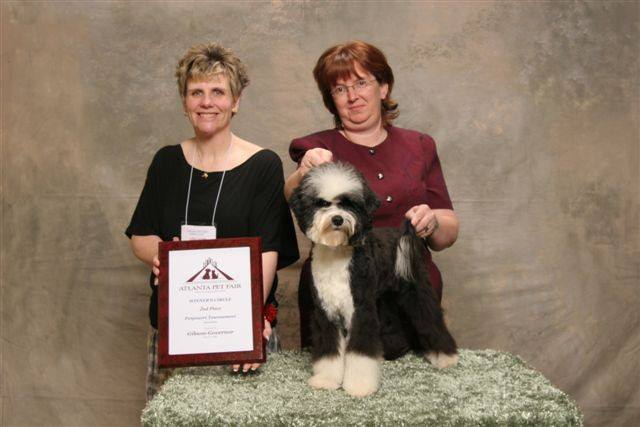 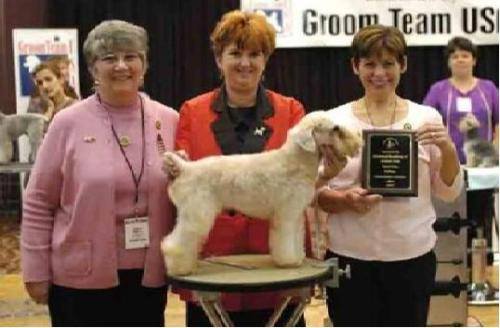 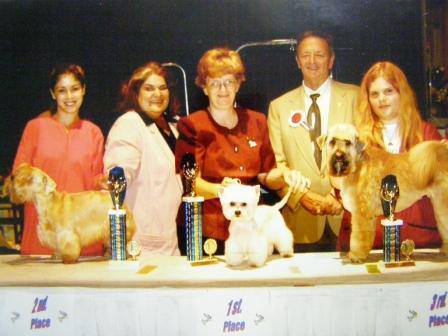 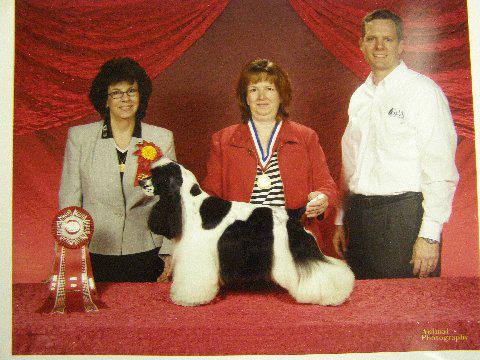 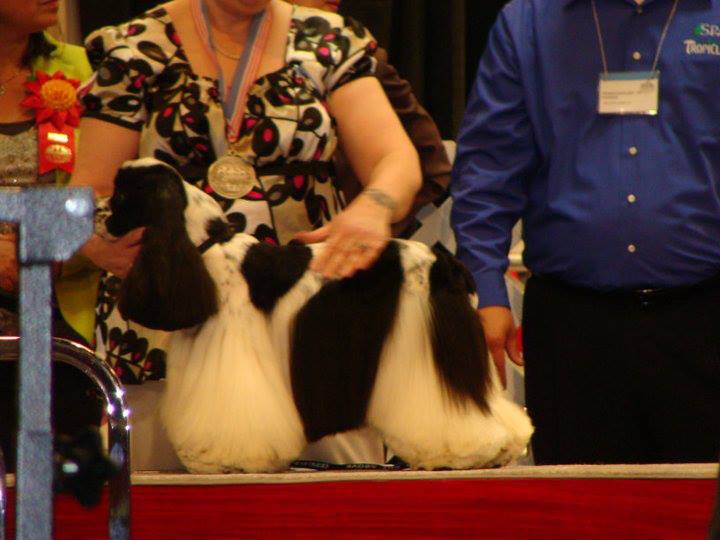 Intergroom 2009 with Kermit. Silver medal Groomer of the Year division. 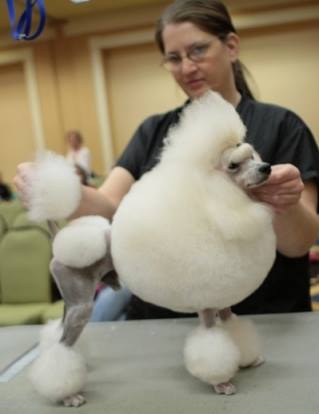 Tammy Breckenridge and Luke. We never ever wrapped or banded him other than banding his topknot.

I cannot say that I enjoyed any loyalty to any product the way I have this one. I use it every day. Every dog. Show dogs. Pet dogs. Dirty dogs., Clean dogs. It is incredibly versatile.

The spray is an amazing detangler. It works best when applied to clean, wet coat and dried in, only being brushed out after the coat has dried. That is contrary to what we are taught and conditioned (see what i did there?) to believe but it works b est when heated up because the product becomes slippery like glass and coats the cuticles making them slide apart. I can demat things with almost no coat loss and even less damage using this spray and shampoo than most people would even try to do.  I have had groomers tell me it doesn't work like the miravle I say it is, but usually they are spraying it on dry coat or trying to brush wet. It really doesn't work well that way. I swear. TRY IT on a matted tail or ears and watch the mats fall out. It takes some practice to figure out how much to use but it is an amazing product.

NOW before you guys get on me about a commercial. I was NOT PROMISED ANYTHING or GIVEN ANYTHING for this article. I DO NOT SELL THIS LINE.  I truly love. USE. SWEAR BY. this product line.