As pet groomers we see a lot of difficult dogs over our careers.  The way we handle both them and their people however is what is critically important.

Dogs many times were stressed, manhandled,  forced into grooming that they hated, injured (or worse)...I thought those days were gone. Until yesterday.

I had a new Shih-tzu client yesterday that taxed my patience to the max. I truly needed a Scotch when, after a half an hour that felt like it had been 2 days, I threw in the clippers (LITERALLY)! I do a pretty good check in procedure.  "Has your dog ever bitten, been irritated,  injured,  medical problems,  grooming issues anyone has told you about". This dog's owner, a southern lady on her late 70s, replied no with a horrified look on her face that I would even ask such a thing!!! But, one thing she said had me worried.  "He is extremely anxious". Spidey senses, red flags, grenades going off...I ihnored those. Usually the owner is the problem not the dog.

Mind you, it was rather obvious that he had a "bad groom" somewhere before he came in my salon.  Hair on his face, ears and tail were all uneven and the hair under his eyes was sticking straight up and into his eyes.  So, I already have an idea that he hates his head being done. I mean, 23 years in this business means that you have an idea of what to expect by looking at the dog and talking to the owner.

I was expecting difficult.  I can handle difficult.

What I got however was Satan's spawn. Literally a demon in a 15 pound, black and white, hairy package.

It's been a long time since I had my ass kicked by a dog. This one kicked mine, my staff's, my own dog's ... it was, without a doubt,  one of the most difficult grooms I have ever done.

If you held on, he freaked out.  Let go, he tried to bail off the table.  Had someone else hold, OMG he became an alligator. We talked to him. Tried the groomers helper.  Tried holding him in my lap...nothing worked for more than a minute or two.

I at one point literally threw a clipper onto my station and put my head down (Billy was holding him). I was tired. He was stressed.  It had only been 10 minutes...

He is a sedation candidate.  No. Doubt.

At pickup i asked more questions.  Told the owner that he was horrible (not nicely either). I asked had he ever been sedated and the reply was "you know,  I always thought that the shop in Xxxx must have done that to get him fone but they never told me". I asked, "was it a vet or a shop?" She then volunteered the name and groomers name.

She then said "He looks better than he did last time There was an incident last time where he was bleeding when he came home ". Well, he was lucky he came home ran through my head because in the wrong place he would have been killed or badly injured.

Well, after she left, a quick Google search and I have the other shop on the phone. I wanted to know how she got him done.

She said he was in her "Batshit crazy file" and that when she was done with him she went straight for a Jack and Coke. No lie, I was wanting a Scotch myself, so I understood.  She also said she had nipped him a few times, he had had busted eye blood vessels a "couple of times ", had an eye pop out... and that no matter how many times she told her he needed sedation the owner would always act surprised.  Like it had never been discussed before.

So. I now know that I am dealing with a traumatized dog who was forced into grooming at all costs.

No way is that ok!!! It is NEVER OK to continue to accept a pet in for grooming that stresses you or themselves to this point.

As the professional you owe the dog, the owner,  your staff and YOURSELF  better.

We are their voices. Their protectors. Love won't fix brain damage and this dog, well, he ain't all there!

There is no excuse for what happened to this dog. Sedation grooming when he was young and then wean him off would have saved him a lifetime of panic and injury.

My mother's dog,  Cinderella (she came with that name so don't judge) panics over her face getting wet or dried. We don't know her story because she was a rescue.  We do know she's not panicked. Just pissed she doesn't get her way. We work with it. It's not perfect.  But it's not going to be injurious to her to wash her face. Clippers, scissors.  Yes. She's not a problem for that. So we forge ahead.

I can not for the life of me understand why a groomer would ever force a dog into grooming that results in injury! It is unethical at best, illegal possibly to be honest.  If you repeatedly injure the dog it becomes abuse in my eyes.

We owe it to the people and dogs in our shop to DO NO HARM.

Btw. I told that groomer how I felt. Nicely.  I meant it. She had a moral obligation to refuse to groom him without sedation.  She failed him. She failed tge owner.  Herself.  Her staff. My staff. ME!!! Everyone.

Meet my sister, Cindy. She had a bath right before I got to my mom's house. She's not perfect. But. She's not hurt. Doesn't she seem stressed out? Yeah. So stressed. 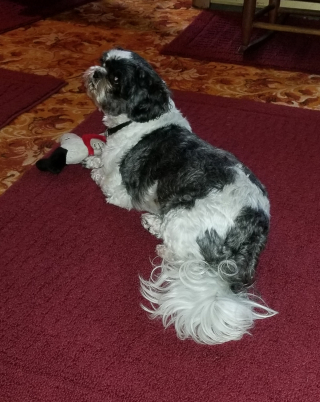 Now, where did I put the Glenfiddich.....

You are absolutely on spot correct!