Sometimes you gotta break a rule or two... 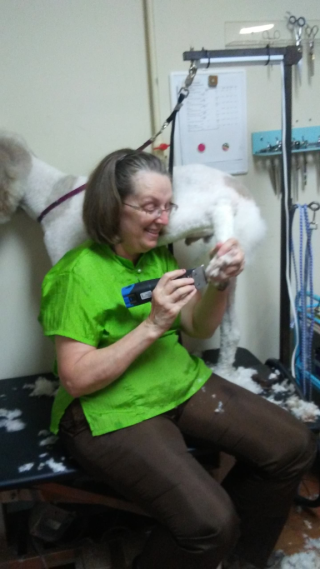 I am funny about how I groom. I do not sit on tables. I do not sit on the floor. I do not work on large dogs in a manner that could get me sat on. Those things, in my opinion, are dangerous and can be career ending if things go bad.

I was running way behind all day long Saturday and imagine my utter dismay to find out I was going to have to do poodle feet on him. I know how bad it can be to do  his feet. The first time we groomed him Sarah Shoe, who was working with me at Christmas, actually helped me by locking his leg at the elbow with her husband Chris helped hold him on the table. I was dreading how bad he was going to be.

I had decided to use my groomer's table to groom him so that there was a wall behind him. She was off Saturday so it worked out perfectly. I was really tired, and he was the next to last dog out of 11 on my schedule. I sat on the table without realizing what I had done. I usually would say DO NOT DO THAT!!! BUT! I picked up his foot, and the position of my body in relation to his put his leg at a neutral angle. He did not fight me. He did not tug. He literally just stood there. 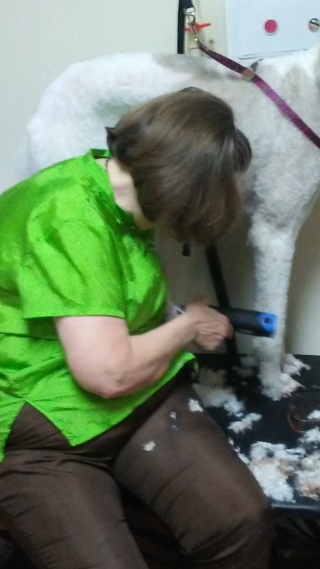 Sittihng on the table with the dog put me in a better position as well to see his feet and that made shaving between his toes so muc easier to do!