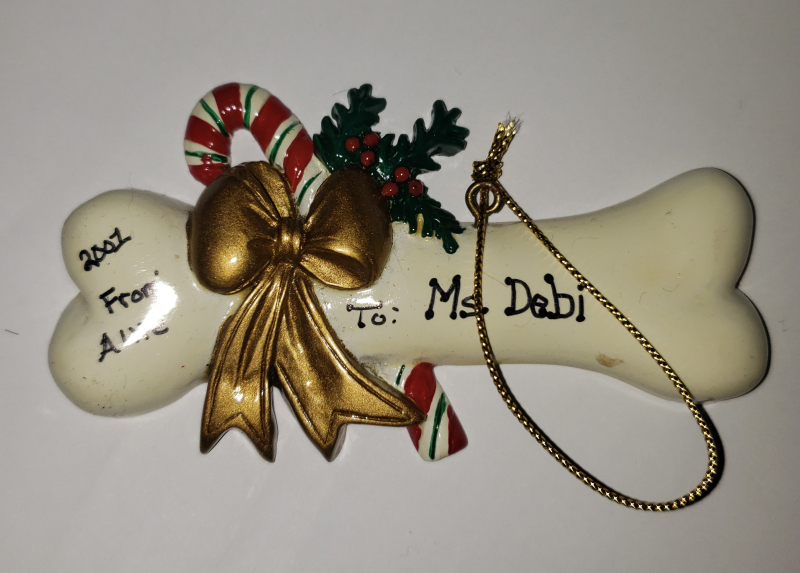 While going through a Box of old Christmas decorations today I found this ornament from Allie.

I smiled broadly and said out loud "I remember her!"  Even though I was the only one of the grooming shop.

She was a little cream colored peek-a-poo and her mom had just gotten married and might have only been about 19 years old. She had no children, and wouldn't have any children for a very long time. Her puppy became her baby.

The problem was that she was an awful dog! And I mean awful. But that's not why I remember her.

She took 3 people to groom the very 1st time I saw her and I think she was 8 weeks old. We struck a deal with her mom that we would continue to groom this biting, scratching, totally freaking out puppy, provided she stuck with our rules. Those rules included bringing her every time she drove by ours shop for at least 5 minutes of play time. Sometimes we saw her 3 or 4 times a week. When mom would go grocery shopping we would keep her and just play with her a little bit or put her up on the grooming table. We would sometimes brush, sometimes do nails, sometimes do nothing other than hold her. And you know what? It worked!

Allie ended up being one of the best dogs I have ever groomed in my life.

Her mother brought me ornaments every year of the dog's life and even 4 years after she passed away and I still have every one of them.

One day I got a panicked call. She needed me to watch Allie. Didn't know how long it would be before she got back. I agreed. No questions asked.   It turns out she was on her way to Miami to pick up a brand new baby girl who had just been born. They original adoptive mother had passed on her because she was half-Mexican, and the next couple passed on her because she was a girl, so here they were 3rd in line and getting a brand new baby with no warning.

Allie became the big sister her mother had always wanted her to be. By then she was older and she had mellowed out. She was the best dog I could have ever hoped for and it happened because I refused to quit.

The reason why I keep these little ornaments that people have given me with their dog's names on them (even if I never put them up), is because they spark such wonderful memories of such wonderful dogs (or horrible ones).

Thanks for the memories Allie! It was a a long ride but a happy one.