Downsizing is scary but Upgrading helps!

Since 2 weeks before Christmas of 2019, I have let 3 people go. We are a shop that can actually SUPPORT 2 bather/fluffers and 4 groomers. Full time. Year round. No doubt.

The problem is I cannot handle the stress any longer. There. I said it. I needed to downsize. But how it happened shocked me, the members of the staff that were let go, the staff that remained onboard and the clients that lost their groomers.

It happened fast. One girl was having home problems. She was very emotional. One day it came to a head, 2 weeks before Christmas.  No one screams at me in my shop.

The next groomer was a fill in groomer that I had hoped would be able to stay on and fill in more. She has been with me off and on for over 20 years. I know, I know... she had hand surgery and even though the doctor had released her, she was unable to keep  up the pace we needed.

Then there was the bather that I considered a son. He called me Mama not Debi. I love him dearly. He has been with me for 4 years but there were problems recently. One very full Saturday he was late VERY late. I had enough. Every day now we find something he was not doing or was doing half way... it was a good thing to let him go. It turns out he is having alcohol abuse issues (we suspected it but he kept denying it) and HOPEFULLY he will  get some help.

We had been in the same building for 13 years, and I decided the shop needed a facelift. Paint, new ramp, new drapes and we went with upscale, elegant furniture and artwork. Antiques. More curio cabinets. Bench for clients to sit on.  Once the changes in staff happened it was evident that we had to make the shop stand out from the other shops in town. We had to be able to support our new policies and prices. We closed for 9 days after Christmas so that we could rest after the holidays and get the shop redone. I spent time with my 4 Grandkids and my daughter and did a deep clean of the shop as well as helped reorganize. 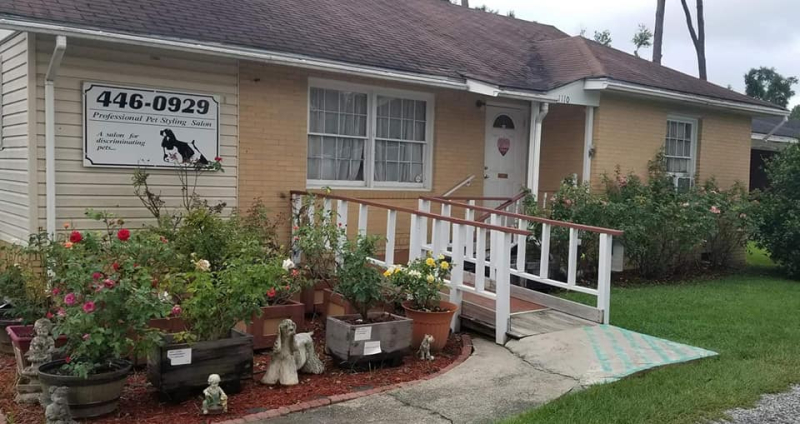 Sherwin Williams has an online program that allows you to play with colors on different walls of a building. We found a room similar to ours that we could play with and we decided on a dark gray and deep red.

Here is what it looked like on the computer simulator, on the left and the shop entryway on the right. Pretty close! 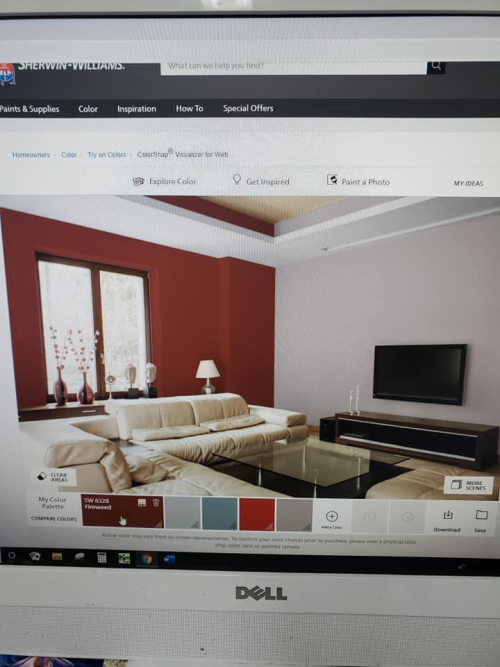 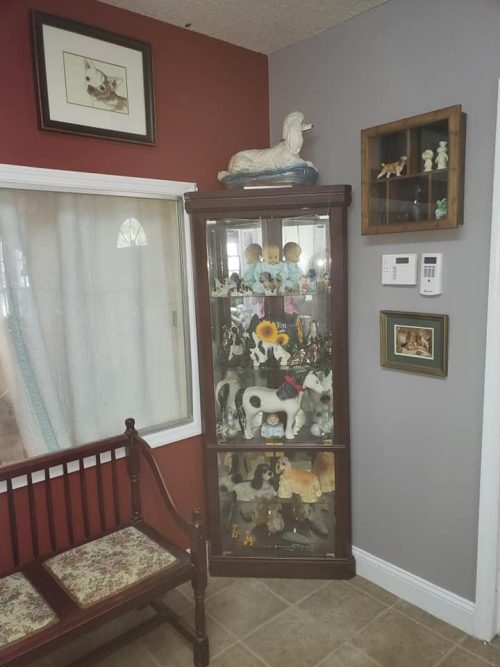 My son and his best friend (both named Brian as strange as that may be) did the bulk of the work. I cleaned and organized, dropping from 4 stations out front to 3. You cannot hire someone if you have nowhere for them to work. The third station is for videowork and nail trims. Billy and I have our stations in the grooming room. Photos below.

It seemed like the more we tried to get it together the worse it looked. This is 2pm the day before we were supposed to open. I calledin everyone I could think of and we managed to make sure the shop was functional by the next day:

The corner curio and the bench came from Goodwill, so there was not a lot of money spent to acheive the look I was going for.

The vintage and antique glass came from the Habitat for Humanity reStore. The other antiques are mine and family heirlooms. I sold or gave away the statues and figures  I was not in love with. I bought n ew rugs and we have succeeded in what we attempted to do.

We have added black and white striped curtains to the windows.

I think it looks like Grandma's parlor. Homey, Warm.

My son and I did the shop books. Crunched numbers, and decided what we need to make enough money to support all of us. We made decisions. We had a plan! The shop was updated and we were going to take on the town!

Then out of nowhere my remaining groomer, whom I have known and worked with since 2004, threw a bombshell at me: He can no longer work Saturday. I am now the only groomer in a salon that has had 3 people grooming Saturday. I have not been alone like this in years.

I have found that I actually TRULY love working alone. I make more money working alone with a bather than I did working with 3 or 4 other people. The trick is to limit the numbers, charge enough money for the dogs and schedule the MONEY more than the dogs. For example: a large Doodle at $100 takes 2 spaces. So I would take 7 dogs not 8 that day. The MONEY is the key. I know how much money the shop needs to make and we make sure we hit that number.

We have stopped taking new clients (with a few exceptions), and we let clients who do not fit our business model go. No longer than 8 weeks except in rare cases, pre-book to get any discounts in play and if you m iss two appointments you must pay a no show fee of $25 and Pre-Pay your next appointment. Miss two and you are going to have to find another groomer.

We have gone from 24-30 dogs per day to 12 (8 grooms and 4 baths) on Tuesday's and Saturday and 18 grooms and 2 baths on Wednesday through Friday. I am downsizing everything and trying to streamline everything. I am not answering the phone, I am letting the machine pick up and I even added online booking!

It is SCARY! But we have a plan. And a newly decorated shop. I know who moved my cheese and what to do about it.

I will  add photos with the drapes tomorrow after I pick them up from being hemmed.

I am very happy.