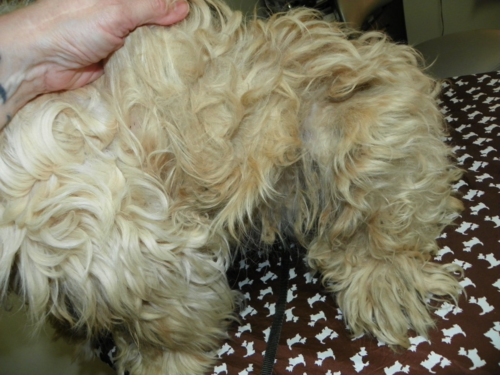 Yep! The weather is warming up in (in most places anyway) and the matted, once and twice a year dogs are coming out of the woodwork. When I first started grooming almost 20 years ago we had no topical flea treatments and dogs were genuinely groomed yearly in the small rural farmtowns I was servicing. I used to see dogs lie the one above (and she would have been in GOOD SHAPE) all day every day. Yes there were well maintained dogs, but there were at least as many that were not. These days, my shop sees mostly well maintained, pampered dogs with only a few once a year dogs.

The one I am focused on today was a strange one for me for three reasons:

#2 She was INFESTED with fleas. More fleas than I have seen on a dog in a LONG time.

#3 She was scared to death and blind.

Given all the above reasons I decided to dry shave this dog (DON'T FALL DOWN!) and in the process I can show you how to avoid infestation in the shop when grooming a dog with this many fleas. 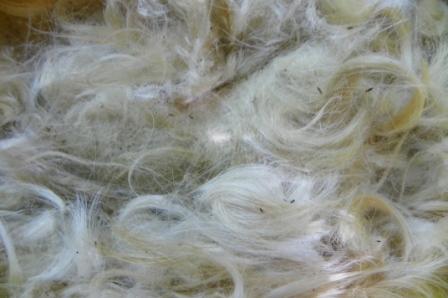 The first thing I did was put my waterproof table cover on the table. You dont have to do that but I prefer it because it makes the hair on the table easier to clean up and keeps the table top cleaner.

Then I put a plastic shopping bag on the knob to the arm of my table so that I could bag the hair as I went along. We save all of our Walmart and Dollar General bags for this type of thing (and poop cleanup as well). That way the bag of hair can be tied off and placed inside the outside trash can instead of having all the fleas in the trash can inside the shop.

I started shaving her down and because she was super clean I was able to use my Bravura. I know, I know, I always preach NOT to use it on dirty hair, but this dog, even though she was covered in fleas and badly matted, was really clean! 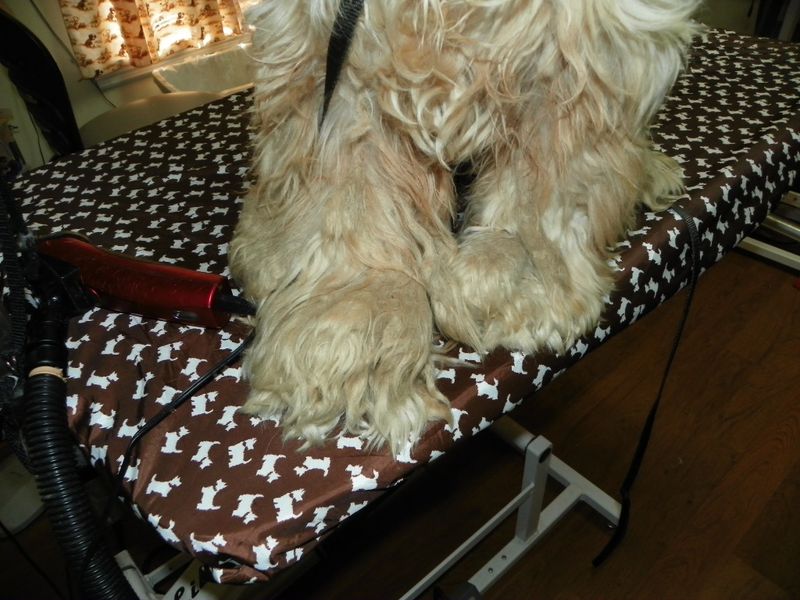 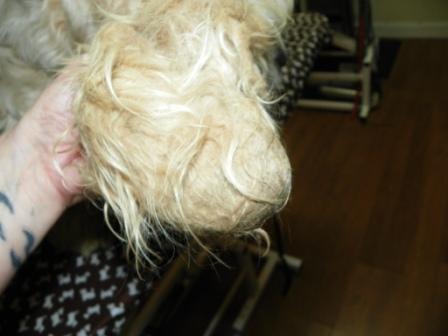 The ears, while they look horrible, were not as tight as many I have seen. They were in no danger of bleeding and believe it or not her ears were in great shape too. Not even dirty inside! If they had been super tight and a hematoma was possible I would have used a Happy Hoodie or vet wrap to keep the ears from being damaged by shaking. I was pleasantly surprised. 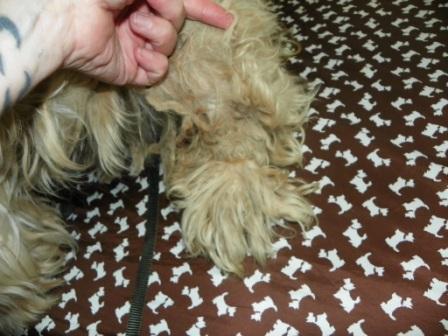 Her feet were dirty from being outside that morning so I left the foot hair to get after her bath. She was biting and thrashing by the time I got to that part anyway, so we both needed a break.

Cleanup is actually really simple. Keep all the hair you can possible keep in the bag that is hanging from your table. I use a flea spray (it doesnt matter which one you are happy with) and every time I put hair in the bag I spray the hair with it. That keeps the fleas in the bag and kills some of them as well. When the dog is in the tub and the bather has taken over control of the dog, I go back to the table, take off the table cover, dump the remaining hair into the bag, sweep the floor, to get up any hair that fell and after one last spray with a pesticide I tie the bag up as tight as I can and place it inside ANOTHER bag, tieing it as well. A quick spray on the floor in the area I was working in and then I take the bag to the curb. There is no way another dog is going to get fleas in my shop and by doing the cleanup as I go along it prevents that from even being a minor concern. It never even crosses my mind anymore with good housekeeping.

We use Capstar in my salon (with owners permission) to kill fleas, and this dog was given one before I started shaving her. She also got a flea bath to help jumpstart the killing process. We put a towel underneath her while she was drying and the dead and dying fleas land on it for easy cleanup. She did not get force dried at all because she could not tolerate it. She got towel dried really well with a warm towel then placed in front of a fan to dry in a warm room. She was flea free when finished. Not a single one crawling!

Her parents had an exterminator out that day to spray the house and yard and she had Comfortis (WHY she had not already given it to her is beyond me.....) so the fleas should be a non-issue shortly in her life.

I didn't think to get an after photo but I did get a video of the fleas. LOL ENJOY!!!!!

First of all I am NOT a vet! I have gathered this information from websites and talking to my vet, who ha reviewed this article. PLEASE seek out medical advice and do  your own research to ensure your pets are covered against fleas Safely!


Since Frontline and Advantage require the pet to come into contact with the product to kill them, it is MY BELIEF that there is a maximum number of fleas it will kill. That is why there are some people who see fleas again in two weeks versus and entire month. If the infestation is SEVERE it will take more of the topical solution to kill them.

Think about it for a minute. Every flea that comes into contact with the product HAS to soak some of it up and when they fall off or wash off the animal it goes with them. Therefore it is not on the animal any longer to work on the fleas that remain. With veterinary consultation, it may be possible to reapply the topicals more frequently. Usually within a month or so they find the frequency with which they have to apply the product diminishes greatly, and they are back on the manufacturers suggested schedule.

I also encourage them to get their dog groomed prior to application so that there will be fewer adult fleas the product must try to kill.

It is important for those battling fleas to understand that the entire life cycle must be broken in order to remove the pest from their environment.

We as groomers only deal with the problem of the ADULT flea which by some estimates is only 1% of the flea problem with the remainder being in the pupa or larvae stage.

Adult fleas can live for as long as one year, prefer temperatures from 75-90 degrees, and a single female flea can produce as many as 1000 eggs in her lifetime, averaging 30 a day!

It is no wonder that they are such a hard bug to kill!

Educating the consumer to the fact that the fleas live in their homes and yards not just on the pet that we are treating is KEY to the treatment of infestations.

Some of the topical flea products, like Frontline, Advantage and Revolution actually kill the larva and pupa stages of the fleas as well as the adults. They act as a topical CONTACT killer and kill the different stages of flea life before they grow into adult fleas and lay eggs. Many companies claim that you do not have to treat your home and yard if you use their product, but I recommend it is done anyway to speed up the process of infestation elimination! These products are approved now for sale at pet stores, feed stores and grooming salons, where before they were only available through a licensed veterinarian.

Program actually sterilizes the fleas preventing them from reproducing. There is also some research that suggests it is an effective fungal fighter in the cases of ringworm and yeast. It is a TRUE Insect Growth Regulator. It does not kill fleas, it simply prevents them from reproducing. ONLY by using it in conjunction with other products will the pet owner see results. This medication is sold by itself and in conjustion with Heartworm medications as well.

Capstar only kills the adult fleas present on the dog at the time the pill is administered, but together with a topical can be the difference between failure and success in breaking the cycle of the flea. It begins working in just a half hour to kill ALL the adult fleas on the pet.

Now there is a new product out called COMFORTIS (and Trifexis is the same medication with Heartworm Prevention built in). This is the Holy Grail of flea killers we have available at this time. It is an FDA approved pill for the control of fleas. This has been the best and most significant development in the elimination of fleas in my lifetime. It is safe, effective and since it kills fleas FAST they do not have a chance to reproduce eliminating the need for premise treatment or yard sprays.

I reccomend it to every client in my salon and use it on my own dogs. You can learn more at Comfortis

Dogs with a seizure disorder or liver function problems may not be good candidates for this medication. You musst comsult your vet beforeusing this product a it for sale ONLY at veterinarian offices.

Any of the Hartz, Sargents, Bio-Spot, Zodiac or any other product found at department stores or pet supply houses that IS NOT FOR SALE at a vet clininc needs to ba avoided at all cost. They donot work, and in many cases, can make the pet sick or even in some cases cause death. Here are some links to articles written recently on the subject for you to make your own decision. Hartz Kills


Whatever you choose to use, discuss it with your veterinarian and remember that all animals in the household, inside and outside need to be treated for effective control.