My friend Barb Hoover is a long time groomer. She also has a huge heart and has taken in some rescue dogs over the years that have had amazing stories.  She recently posted about a Standard Poodle puppy she has taken in as a foster dog. I thought the tale of his life up to now was so interesting I asked her if I could share her post as a guest blog. I hope you will find this as interesting as I do. 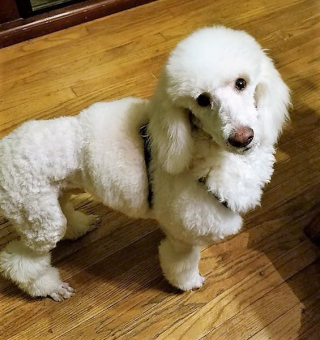 "This cutie patootie is Wonder. This poor guy has had a helluva life. He's only 6 months old and has had 3 homes before being surrendered to a rescue group just before Christmas.

He was surrendered in a pretty sad state. When I met him he was terrified, malnourished, shut down, incontinent, sopping wet and stained yellow from his own urine.

Of course, my brain went into over drive of horrible abuse and neglect. Then I got all his previous Vet records. In going through them I think I've pieced together his story. It appears so much was lack of knowledge of his first owner and lack of communication with his primary Veterinarian.

Once he realized I was a safe person and opened up to me, I realized a couple of things about him. For starters he is functionally blind. There is some vision, but it's not reliable. As most blind dogs do, he gets around quite well. It could have easily been missed by a new owner, especially if maybe he was their first dog. He lived with them from 8 weeks to about 5 months old. He likely learned the house in a way that they missed the vision problems. He could have also been excused as just a clumsy puppy.

The second thing I noticed was that he had a super odd way of eating and drinking. He drank like a bird. He would get a mouth full of water, then lift his head up high to swallow. It was bizarre. Eating was difficult too. I was able to find a dehydrated raw that had odd kibble shapes that he did well with, but something was definitely off. I tried looking in his mouth to see if maybe he had something lodged in there. He became very combative every time I tried to open his mouth wide to look in.

He also breathed weirdly. I honestly thought we would find that he had a horrible heart condition.

Due to his vision problems, the appearance of some major neurological issues, and possibly heart problems, it was decided that he would just come live with me. Barb's house of misfits. : )
I could do some evaluations and see if there was any chance for a decent quality of life.

After Christmas we decided to sedate him and have a really good look inside his mouth. His heart sounded good, which was a huge surprise, but something was obviously wrong. What a shock to find out he was tongue tied! He could not extend his tongue past his front teeth. That explained so much. He's very stunted in growth. He was less than 20 lbs. He had no muscling and was overall in very poor condition. Up to that point, the poor guy had never been able to eat or drink properly. We are not even sure how he nursed as a baby. He also had a gross snotty nose. He was like a toddler with a cold. Well, being unable to properly swallow and unable to lick his nose, he had no way to handle normal mucus on his own. He was also unable to pant which accounted for the odd breathing. It took a few snips to free his tongue and get him on the road to recovery.

There is no blame really to the owner or his original Veterinarian for missing these things. I could easily see how an owner may not recognize the oddities. Maybe they thought he was just clumsy? Maybe a little quirky? Maybe they never had a dog before and had no idea it wasn't normal. I have my hands on 30 - 40 dogs a week. It's easy for me to recognize things that are not normal.

If the owner didn't know, they couldn't properly ask the Veterinarian to check the right things. He had been brought in for the snotty nose. The notes say that they said he had it on and off since they got him. He was diagnosed with an upper respiratory infection and maybe allergies. A reasonable diagnosis with only the information they had at the time.

He didn't like his mouth opened, but heck that could easily be attributed to a bratty puppy. Lots of puppies don't like their mouth opened. His teeth had been checked at each visit, and he had had several visits for vaccinations, but that only requires lifting the lips to see them.

The vision caused him to seem suspicious and a little head shy. Again, that's not uncommon for a puppy. Maybe he didn't get proper socialization? Maybe he just had a shy personality?

It wasn't over for him though. The incontinence disappeared completely in less than 48 hours on steroids, but sadly returned as he was weaned off of them. He had an odd gait, a little drunk looking. Was it from his lack of muscling and malnutrition? Or was it something else? We did xrays yesterday and he has a spinal injury. Most spinal injuries present with pain and/or paralysis of the rear. In some locations though, where his is at, it causes incontinence. I can totally see how this was missed. From what I'm gathering in his Vet records, the incontinence started out very minor. It was only noticed that he had dried urine on the inside of his legs. The last note in those records was about ten days later, a message from the owner wanting to try incontinence meds, and then a note about him going to another home.

Two weeks later a third person surrendered him. Potty training problems were listed. They didn't have time to do it right. The surrender form was filled out in a way that made me think they honestly did not grasp that there was a real medical problem. I'm not sure how they couldn't know.......... but I do believe they were clueless.

My guess is that his vision impairment had something to do with whatever accident caused the spinal injury. He does go up stairs, but is hesitant to go down. He has mastered the four steps that go out to the backyard here, but I could see that a full stair case could mean disaster for him. Maybe he fell down a flight? Maybe he was a normal puppy running through the yard or house and ran full force something? The injury wasn't noticed and continued to get worse and build inflammation causing the incontinence to get worse.

Currently, he is a happy, normal puppy. He does not appear to have any pain or discomfort. The steroids are keeping the inflammation down which is stopping the incontinence issues but keeping him on steroids the rest of his life has it's own set of problems. We will be going to the University for a consult with the ortho Vets. The injury is at least 6 weeks old though, so I don't know if it can be repaired."

I am grateful that there are people like Barb who have the skills and kindness to help out dogs like Wonder.