Home This Blog's Archives Author's Website Select Another GroomWise Blog GroomerTALK Community
Accepting a challenge...
If you get bitten...

After more than 3 decades grooming pets, I have learned a few things about communicating with customers. My daughter grooms with me now, and sometimes she seems amazed by how I interpret conversations. Here is an example: new customers came in with their recently adopted young adult West Highland White Terrier. The dog had been shaved all over a few months before they got him, and his coat had grown in rather uneven and messy.  He was a cute little dog, and I was looking forward to making him look really nice.  "What do you have in mind for his hair cut today?" I asked.  The man said, "I want him in a traditional Westie trim." The wife said, "I want him short and easy to take care of."  I said, "OK!" and off they went.  My daughter looked at me and said, "So, what are you going to do?" I said, "I'm going to make him cute."   After a bath, fluff dry, nail trim and really good brushing, I put him in a traditional Westie pattern, with short furnishings. I made sure his head and tail looked the way they should. It was very rewarding to take him from looking scraggly and make him look handsome.  My daughter was dubious. When the owners returned, they adored the trim, and have kept him in that same style for the last several years.

What I have found is that listening to what people lead with is what is most important to them. To the man, he wanted his rescued dog to look like the pure bred animal he was. The wife, (who was clearly in charge of brushing and coat care at home)  wanted an easy upkeep hair cut. I knew I could make him look the way he should, but a bit more tailored so there was not excessive coat care between groomings. And that is what I did.

Here is another example. When someone comes in and I ask what they want for grooming, and the first words out of their mouth are, "She needs her nails done!" I know that I need to pay extra attention to getting those claws trimmed as short as possible, and buffed with my Dremel tool to make them as smooth as possible.

Likewise, if the first comment is, "I can't see his eyes," I make sure to trim around those eyes so that they are clearly visible, and will stay that way until the dog returns in 6 weeks.  Of course there may be other instructions after that first comment, and I listen, but I have found that if I really pay attention to the first declarative sentence, I am very apt to make the customer happy with my work. 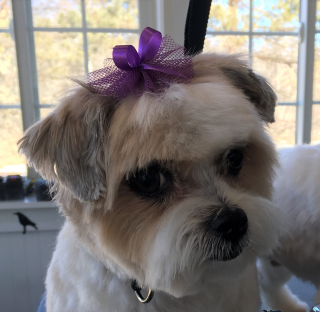