Home This Blog's Archives Author's Website Select Another GroomWise Blog GroomerTALK Community
If you get bitten...
Don't forget the shape...

Yesterday I groomed a cute Havanese that is a regular when they are in the area.  They had just returned from winter away. I saw him when he hopped out of the car and my first thought was, "He looks cute."  When he got closer, however, I noted that when I looked at him his head was what I noticed most. I flashed back to seminars I have attended over the years where I first was introduced to the concept of "balance," in grooming. It's a good topic, and this dog seemed like a nice example to explore. 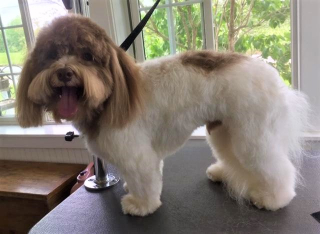 Here he is after I bathed and prepped him. There is nothing "wrong," with this groom.  His owners had no complaints, but did ask me to take him "quite a bit shorter," for this groom. 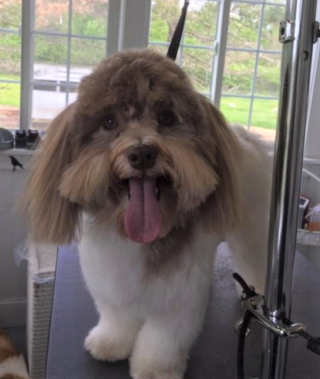 In reality his body length was nice, and similar to what I normally do to him.  His head, in my opinion had way too much fur around his muzzle and it made him look out of proportion.  He also had a multiple clumps of long, wet, hairs on his lips that were getting dragged into his mouth. That must feel unpleasant to a dog, and the constantly moist hair gets smelly and discolored.

Using a #1 Wahl comb, with my Clipper Vac, I clipped his body coat. Then I just scissored his legs, blending into the clippered areas.  I took about 2" of hair off his tail, it was dragging the ground and didn't balance well with the length of his body and legs. Next, using a trimmer with a Wahl #0 comb, I shaped his cheeks and muzzle. I used my chunkers to tidy things up. I also used my trimmer to clean his lip line and remove those icky, wet hairs.  The change was fairly dramatic. In an ideal world, I would have shortened his ears up a lot, but his people like them long. 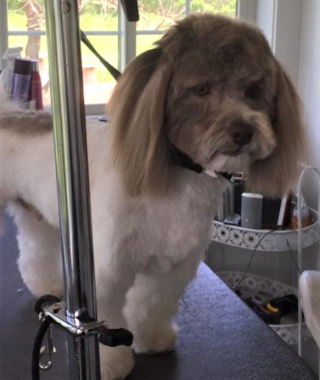 As luck would have it, his humans came to get him while I was trying to get "after" shots, and he became a blur of happy dog, but hopefully you can see from this image the difference it makes in his overall appearance to have his head and face trimmed shorter.  It makes him look lighter, and it will be easier for his owners to maintain, too.

Perhaps the best explanation I can give for groomers who are trying to work on balance and proportion is this; stand back and look at the dog. If any one aspect of it grabs your attention first, there is a good chance that whatever that part standing out to you is out of balance.