14 years ago I talked to a man who asked me about hand stripping his young (under a year old) Cairn terrier, Fiona. He and his wife were retired and on a limited budget, but he wanted his dog to have the correct look for her breed. I suggested to him that I could do a "pet strip," seeing the dog every 6 weeks, stripping coat for a set amount of time in accordance to what he could afford, then using thinning shears, chunkers or a snap on comb to even up the length where needed to create a uniform appearance. He liked this plan and I have seen the dog like clockwork ever since. I grew to care for the owners and the dog.

About two years ago the wife died. I attended her funeral. The man, now in his late 80's, continued to come. Last fall he said, "I think I'm getting too old to drive here anymore." There are not any groomers near where he lived that I could recommend, so I offered to come to him and do a house call groom on my day off every 6-8 weeks. He was delighted. We set up the first appointment and he had to cancel because his dog ate a rock and had emergency surgery. We set up another appointment and he had to cancel because he was sick. A third attempt was cancelled when we had a blizzard. I kept calling, but never got any reply or even an answering machine. I worried and fretted. 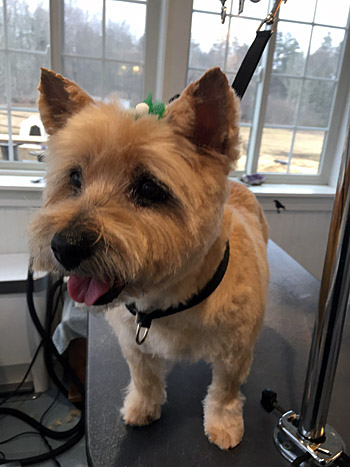 Last week another customer called. She has a habit of taking in old, difficult, hard to adopt dogs. "I just adopted a 14 year old Cairn named Fiona," she said. The story is that my sweet customer had moved to an assisted living situation. His children didn't want the dog. But now she lives in a wonderful home and came full circle, back to me for grooming. I was beyond delighted to see her. She was well overgrown, and her new person wanted her to have an easy, short hair cut. I happily complied. After I have her a long cuddle.

I don't know about you, but I suspect that you become attached to the pets you groom as much as I do. It's hard when we don't know what happens to them. I am so glad to be able to care for Fiona in her final chapter.