New Andis hinge frustrates some groomers getting blades on clipper.

What has changed on the hinge?

The Hinge that fits the AGC, AGR, Ultra Edge, or any model using the hinge/latch combination, you could notice problems getting blades to lock on. The latch is that little black steel thing you press to unlock the blade from the Andis clipper, the hook is on the end of it and it hooks onto your blade socket. To get a blade to lock on the clipper, the latch MUST hook the front part of the blade socket. If not, you can pull the blade away from the clipper which will cause it to rattle, drag, stop cutting, etc. Most groomers are used to the blades automatically locking on the clipper once the hinge is snapped shut. Sometimes, with the new hinge type, this may not happen without changing your technique a little. 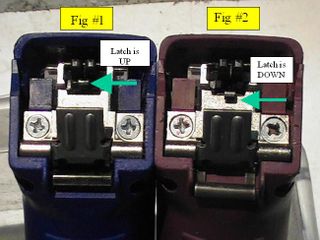 This is the original Andis AGC hinge we all know and are accustom to using. When you open the hinge lip the latch hook is in the "UP" position. This enables the latch hook to lock on to the front of the blade socket automatically when the hinge is closed with the blade on it.

This is the new style of Andis AGC hinge, it is different in one way. Notice the latch hook is in the "DOWN" position when the hinge lip is open, this could cause problems in locking the blade on when you close the hinge.

When the latch hook is always  down when the hinge is open, that hook on the end will hit the sock of your blade near the middle someplace. When it hits there it will never grab on to the front of the socket like its suppose to, it will just hit the socket body. 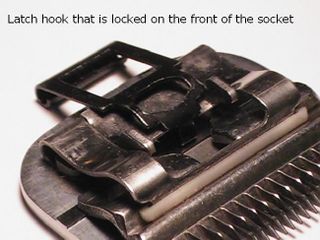 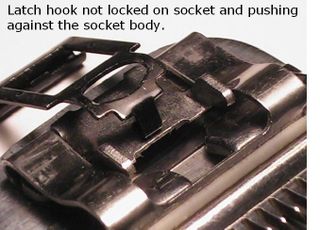 The picture right above shows the problem when the latch is "Down" when the hinge is open, it doesn't lock on automatically most times. It just hits the socket body as shown when you close the hinge and this can cause another problem. If you try to force the blade to lock on, that latch hook can bend the socket forward. If this happens that blade may never lock on any clipper properly because the front of the socket is now too low. (see picture below). 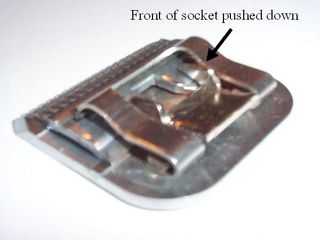 To fix a socket that is bent down on the front is very easy. Just get a pair of pliers and squeeze the back of the socket until it comes down level again. (see picture below) 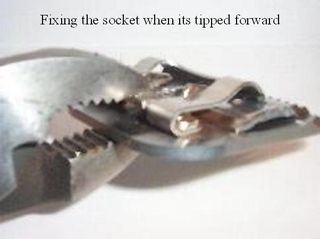 Another problem that can happen by forcing the blade to lock on is the actual breaking of the hook off the end of the latch. (see picture below). If this happens no blade will lock on your clipper and your blades will rattle, corn row, pop off, and just stop cutting all together.

The solution is simple

If the hinge on your Andis clipper gets replaced by one of these newly engineered ones, you may have to change your technique of putting blades on your clipper.  If they don't automatically lock on when you close your hinge you may have this new hinge type. To prevent any of the problems I described above, you may have to put your blades on using this technique:

1. Put blade on your open hinge

2. Push up on the latch button and hold

3. Close your hinge with the blade

4. Release the latch button, the latch should hook the socket of your blade.

This technique is used by most Laube users every time they put a blade on their Laube clipper. The latch is always in the "Down" position on a Laube hinge, and they have to use the four step method above to lock that blade tight against the clipper body so it won't rattle going 10,000 strokes per minute.

I've tried to explain the problems my customers have been having with the new Andis hinge. Maybe they are going to change back, but until then we may have to change what we do to get the blade to lock on. Hopefully, the pictures helped you understand what causes the problem so you can deal with it better. Now, if your blades have worn or rounded socket fronts, then the latch hook might just pop on by its self and the blade will lock on. If not, your going to have to push on the latch when putting the blade on, and again when you take it off your clipper.

Have Fun, Be Safe, and Read Those Labels :)