Having Trouble Getting Blades On An Andis Clipper After Sharpening?

I've been getting boxes of sharpening in recently where the groomer has said the previous sharpener did something where the blades don't go on the clipper, they just buzz and rattle and wont latch on. I took each blade and try them on MY Andis clipper and they go on fine and run great!!

During the sharpening process the socket which hold the blade on the clipper is set to factory specs, which amounts to the socket adjusted so its perpendicular to the comb blade (flat not tipped forward), and the socket ears adjust straight up and down. The blade is now in the same condition and spec as it came from the factory. This is the proper way a blade should be returned to you.

Why Wont The Blade Go On The Clipper?

The problem may be on YOUR end and not with the blades. Andis changed the hinge a few years ago to a "Manual Hinge", which means the latch doesnt go up when you open the hinge, you have to push it up. The days of opening hinge, putting a blade on, starting the clipper, then slapping the blade on will not work much any more. The latch has to be pushed up to put the blade on and take it off.

With the latch down all the time now, when you slap the blade against the clipper its going to hit the socket and not let the blade lock on. The blade will never go on this way, and if you keep pushing you will bend the latch back and none of your blades will go on. The first picture shows this. 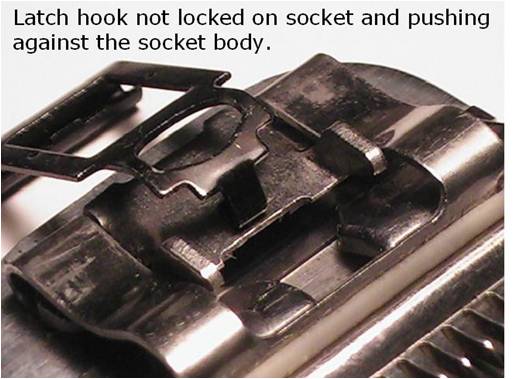 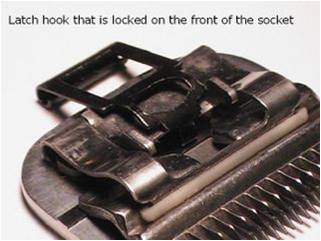 I've Tried To Do The Right Way And It's Hard, Is There An Easy Way?

My website has two forms of instructional media for this procedure. The first is an actual video on the video page called "How to put a blade on an Andis Clipper". In this video I explain the hinge differences from the old to the new hinge, the problems when you don't get it on correctly, the damage you can do to your hinge/latch, and finally a foolproof way I used for years to put blades on my Laube clipper. If you have weak hands or short fingers, they way I show you will work. Its going to be a lifestyle change for you I know, but Laube and Wahl users have been doing this forever because those clippers don't  have automatic hinges either. The second is an article called "The New Andis Hinge", and its on the articles page of my website. Both can be downloaded for free.

I've Been Putting Blades On Without Pushing The Latch Up And It Works!

Good for you, I'm glad its working for you, but there is a reason for it. It all depends on the tilt of the socket. If its tilted forward a bit because you've been slapping blades on without raising the latch, it may be enough to let the latch raise by its self and latch on. Or, if the socket is tilted forward because a sharpener didnt adjust it during the sharpening process ( most don't), it will latch on. The thing to remember is this, the Andis latch is made of thin painted metal, and it bends. So even though your getting it to go on the clipper now, Murphy will show up one day, and when he does thats the purpose of this blog. You know exactly what the problem is when none of your blades go on the clipper.

Have a great day and read those labels