Why do switches on clippers go bad and/or burn up?

Switches have been upgraded from a simple toggle switch, to switches that regulate voltages and have circuit boards that are fragile.

Look at the old Oster switch of yester year, it was simple. The voltage came in at 115 volts AC, and you turned the clipper on with a simple toggle switch. The clipper came on and you were grooming.

The Oster switch above was simple, you could leave it plugged in all the time with no worries of voltage surges. We used to hook boosters upto our Oster clippers and make them run faster, some of you remember these days. And if the clipper didn't run hot enough to burn the palm of your hand, you thought it wasn't running good and needed repair. Those were the days!

The Changes in the clippers today!

Today, its a whole new ballgame. Clippers don't run on normal house current anymore, most run on DC voltage and its converted right in the clipper with circuit boards on the switch. 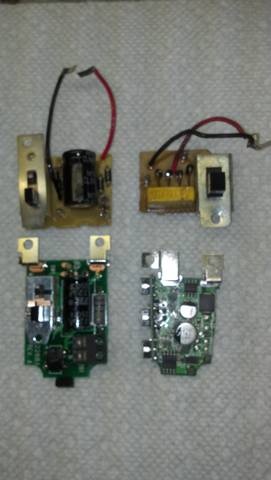 As you can see by this collection of Andis switches, they consist mainly of circuit boards and wires. They take normal house current and convert it to DC voltage so the motor runs with more torque and more efficiently. All brands of clippers have circuit boards now so you can't get away from them. They can last forever, but fail if certain criteria are met. Let's look at this criteria.

No matter what clipper you have you can crack a circuit board by dropping it on the floor. The boards are actually fragile, and can do wierd things when cracked. They can let the clipper run good until you shut if off, then it wont come on. If you break a certian capacitor off the board (Andis), you will only have the low speed. The high speed is controlled electronically with this capacitor. Some of you think its a battery when you hear something rattling around inside the clipper.

All switches have an incoming voltage range they operate successfully in, the norm is about 112 volts to 125 volts AC. Above or below this voltage range can burn up components on the switch circuit board. Here is a big example: Your clipper is plugged into the same line your dryers are plugged into. Not the same recepticle, but the same line hooked up to the same circuit breaker in your electric box. When you turn a dryer on, it uses about 20 amps to start the motor, then drops back to its operating amps of about 10-15 amps. Bigger the dryer, the more amps it takes to start. The problem is when the dryer amprage falls back from 20 amps at startup, to 10 amps running, it throws a little spike in the electricity. This spike can be 120 volts AC,  or 130 volts AC (we don't know). This little spike is what blows resistors on your switches circuit board. The resistors can take alot of punishment, but one day they won't and thats when it blows. Your clipper will probably run until you shut it off. This doesn't happen all the time, but it can.

Low voltage is just as bad on switches. A customer of mine who is a mobile groomer had problems with switches failing monthly. Her unit ran off a generator, and she had a large dryer plus an air conditioner running all the time. When she used her clipper, she said it ran slower than when she used it in the house. This is another bad thing. The circuit board has resistors that can blow if the voltage is on the low side 105 volts to 112volts AC. The switch trys to compensate the DC voltage its trying to put out that runs the clipper, and it just fails. I suggested a Universal Power Supply (UPS) so she could plug just her clipper into it. The UPS system has batteries inside that raise the voltage to 115 volts AC when its low, and cuts off the peaks when the voltage gets above 122 volts AC coming into the unit. She never had a problem with switches after that.

3. Lightning, plus surges and brownouts from your electric company.

We all know lightning can burn up about anything when it strikes, but it can also produce small surges that the electric company can't ground out before it reaches your clipper. In my shop one night we had a storm with lightning, and when we came in the next day a clipper smelled like it was burning when we turned it on. A surge had come into the shops electric line and went through the switch of the clipper and melted some windings in the armature. How that happed I can't figure out without blowing the switch in the process, but it did. I replaced the aramature and the problem was fixed, and the switch is still working good. Leaving clippers plugged into the wall overnight can have problems the next day from spikes or brownouts in the line. Even though the clipper is turned off, voltage can jump that brass slide switch and do harm to the components of that switch. We use a power strip now with a surge protector on it ($13.00 at home depot). The surge protector will blow if something comes in the line, and this disconnects any power to the recepticles of the power strip. Its worth looking into.

My suggestions to help keep your clippers running.

A. Get and use a power strip with a surge protector.If you don't know, or your not sure the status of the electrical outlets, and what circuit breaker is controlling what, get one. Corporate grooming salons have problems because they build the store first, then put the salon in a corner where they have room left. The electric circuits are already laid down and won't be changed. So if the outlets in the grooming salon are on the same circuits as the dryers in the back, you may have problems. Even in your own shop, if the clipper is changing speeds when you turn a dryer on, it can help and so could a UPS. And when you go home just turn the strip off to keep surges from the electric company doing any damage if you shut the strip off. I'd even put your shop refrigerator on a strip because the compressor can fry if a surge comes in.

B. If your mobile, get a UPS system. All generators have different voltage outputs, don't assume its perfect 115 volts AC. In my mobile sharpening unit I have a small volt meter on both the incoming voltage from the generator, and one on the output voltage of the UPS. And there is a BIG difference!! My blade machine takes 15 amps to start, and with my air running it will make the UPS beep. When this happened I got a larger generator so it wouldn't drop power so bad. As a mobile groomer you may have the same problems. If you turn your air on, then your dryer, maybe a clipper vac, and your UPS keeps beeping, your generator isn't large enough. Your UPS is telling you the voltage is too low and it will compensate until the batteries it go dead.

**** While Im on the subject of generators for mobile groomers I'll give you an example that happened to a local mobile groomer who had these problems. It's a guy, and when he got his unit it came with a generator in the back. The unit came with a Handy Vac, a HV dryer, and the unit had a Coleman top mouted air conditioner. He did get a UPS because he did his invoicing with a laptop computer, and that was a very smart move. When he turned the HV on, or the Vac system on with the air running the UPS would beep one time. This is normal I told him, mine did it as well. Thenhe bought an 850 Double K dryer so he could get faster and do more dogs per day. When he turned that thing on the UPS system started to beep and kept on beeping until he either turned the vac or the air off. I don't know the size of the onboard generator but it needed to be replaced if he kept the 850 in line. His unit was a trailer and he pulled it with a truck.

The very next time I was there sharpening we talked about generators and I told him about my problem and new generator that was in the back of my truck. He wanted to test my generator because he seen what I had running inside so we did. When I shut down, he ran a cord over to my generator, and he started all his equipment in his trailer. He was shutting down things and started them back up and his UPS never made a sound!!!!  So he went to Lowes and bought the Troy-Built 7000 XP which has 15,000 watts of cranking power. He set it in the back of his truck like I did and everything has been fine. The generator cost about $850, so not a bad deal and Lowes are everywhere. I think with an "all-in-one" unit your limited on generator space, so you have to contact your dealer for a more powerfull powersource. Enough on generators *****

C. Try not to drop your clipper.The hardest thing to do is NOT set your clippers on your table under a dog, I know this too well! The most innocent dog can accidently kick your clipper and you have a 50/50 chance of it working properly when you pick it up off the floor. Its a lifestyle change to remember to not do that, and here is what I did because I had room. I set up a little stand next to the table that held the blades I was using, oil, scissors, and a small bowl of bladewash. The first week I had to think every time I set the clipper down to actually put it on that stand. It took about a month to curb my habit, but now if I work in the shop the first thing I do is locate that stand. I don't groom without it, and its my suggestion to you if you can try that. It costs money to fix clippers and scissors, so a little prevention can really help.

Thats my take on the subject of clipper failure. I know it was long, but again my audience is not only groomers, but sharpeners as well. I get alot of phone calls about this subject and most are from sharpeners who really don't know why clippers do what they do, they just fix them. So if this information can help their clients as well as groomers who read this, its a win/win all around. NOTE: The voltages I described in the text came from several different places in my research. They all listed different voltages for the same components so I just took an approximate. They may be a little off, but my intent was the meaning behind them and the points I was trying to get across, so excuse me on that.

I hope you all have great days grooming, and read those labels