Why is there a space between the blades of my shears? 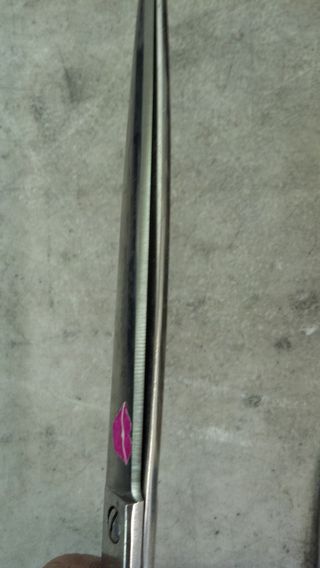 The next type of shear to talk about is the Convex Shear. These shears still have a space or "set", but its very very small. It would be difficult to get a piece of paper to slide between the blades.

The convex shear cuts hair completely different than the beveled edge shear, it chops rather than slices. Why? Because the convex shear edge is a razor rather than a slicing bevel. The edge is so sharp it doesnt have time to slice, so it takes all the hair off with one wack. You shouldn't feel hair cut with a convex edge its that sharp, when you do, and it starts to push the hair, its time for resharpening. Groomers get the best finish using convex shears, and you use them on clean combed out dogs only. Any dirt or knots in the coat can cause the convex shear to dull or pit the edge, then they fold.

One note about convex shears, just because they have the convex edge doesn't mean its good. Today many manufacturers are putting the convex edge on low grade cheaper shears, to me the metal isnt hard enough to hold this edge over time. Example, if you buy a shear for $50 and it has a convex edge, chances are that edge will round out in two weeks because the metal of the shear isn't top quality. A top quality shear you'll spend some good money on and the metal is good enough to hold this edge for months. I recommend that if you having trouble keeping a convex edge cutting on your $60 shears, why not have the sharpener put a small beveled edge on it next time. That edge will cut for months on these cheaper shears. Replacing a convex edge on a shear can range from $10 to $25 becuase they are honed to sharpeness rather than ground to an edge.

Below is a view of the space between the blades of a convex shear, there is barely a space. The only space it needs is for the blades to pass each other without binding, they need to be close together. If you loosen the tension of a convex shear or thinner too much, the blades will grab each other about an inch from the pivot screw. If this happens, dont keep using it, it needs to be honed again. 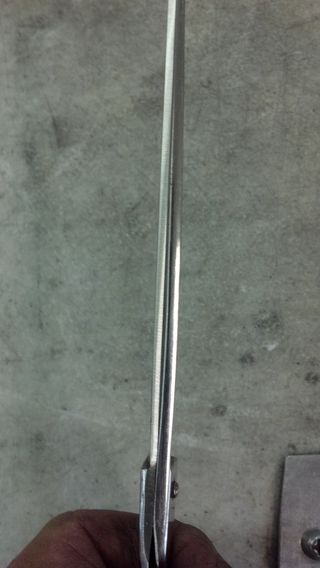 I posted this information for groomers, as well as new sharpeners, so you know the characteristics of both styles of shears. Some folks buy shears and really don't know any more about them except they cut hair. There is a big difference, beveled edge shears are for general grooming, convex are mainly for finish work. Sharpeners sometimes get calls from very mad groomers after they get thier shears back from sharpening and say "When I got my shears back from you there was a space between the blades, it wasn't there when I sent them to you". Yes ,it was there when you sent them, you just didn't know why. So now everyone knows the space between the blades of a beveled edge shear is supposed to be there and why its important to the way it cuts.

I hope this helped you in some way make decisions on shear purchases and what you'll be using them for in your shop. Another question I get asked is "Whats a good lubricant for shears"? In my opinion, you don't have to get special lube for them, you can use something you may already have.....blade wash! Good blade wash has several good uses for shears. First, its a lube, most good blade washes have liquid silicon in them, so does spray coolants. Secondly, they have a solvent in them. This solvent can break down the pet dander and small hair that accumulates around the pivot screw in your shear that can tighten the tension over time. When a shear slows down try the blade wash before loosening the pivot screw. When you loosen the screw it changes the way the shear cuts. To apply blade wash to your shear pivot do this. Get a Q-tip and stick it in the blade wash to moisten. Point the tips of your shears up and open them enough to have one blade straight out to one side. Now take the Q-tip and press it against the blade still pointing up so the blade wash drips down into the pivot. Open and close the shear rapidly and you should feel it naturally loosen up for you. If you open them wide again you may see some dark stuff moving out of your pivot area, this is the stuff that collected there and tightened your tension.

Have a great day grooming, and please read those labels :)