Eight years ago, Dawn Omboy had a great idea. How fun would it be to actually meet the people you "talk" to everyday on the Internet.

Many of us have been friends for so long, yet have no idea what each other looks like. At trade shows, we would sit next to each other or look at the same pair of scissors at one of the booths. But not make a connection.

Dawn approached Sally Liddick about hosting an internet get together the night before the show opened thinking Sally would put it together. Sally was all for it, BUT it was up to Dawn to coordinate it. After the panic subsided, Dawn and her friends pulled it off. It was so successful, that it is now a staple at Groom Expo.

Every year, the Internet Mingle hosts a fundraiser. Thanks to the generosity of vendors such as Espree, Groomers Mall, Davis, PetGroomer.com, Groomers Lounge, Wag-n-Tails, Bardel bows, Barkleigh, Talon Shears, and so many others, they were able to sell raffles tickets for donated products.

This years proceeds will go to the GEAF. The Groomers Emergency Assistance Fund has been set up to help fellow groomers in need. Their mantra is "Groomers Helping Groomers."

There will be a cash bar and Espree is providing giveaway's to the first 75 people in the door PLUS a free raffle ticket. You can always increase your chances of winning by donating and receiving MORE raffle tickets. The bonus is getting to meet all your interney buddies for a night of fun. 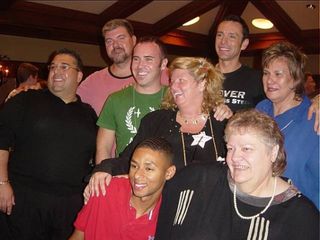