What A Bunch of Losers

See that picture. What a bunch of losers we are! 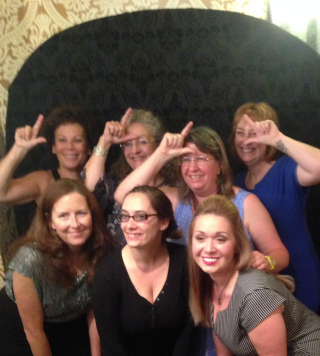 It was taken a couple of years ago at the Barkleigh Honors dinner. We all lost. We failed to succeed.

What exactly does that mean?

Did you know that Henry Ford had 5 failed businesses? R.H.Macy had 7. Walt Disney was fired from a newspaper job due to lack of creativity. (insert eye roll here)

It isn’t failing that’s devastating; it’s fear of failure and learning what didn’t work. Fear of failure is what keeps many people from even trying. And not understanding the flaw is what prevents those from trying again. Can you imagine a world without Mickey Mouse? What if Walt Disney quit after his second bankruptcy?

“Only those who dare to fail greatly can ever achieve greatly.” – Robert F. Kennedy

Let’s talk about one of my failures. Just one. I could talk about more, but we would be here all day.

My goal was to teach pet first aid to the pet grooming industry at national educational conferences and trade shows. My friend, Beth, and I took the training and began teaching local classes. Some of these classes had ONE person in them. To fully appreciate this, we are both mobile groomers who wouldn’t get out of bed for less than $400 for the day and we were splitting $150 for the day before expenses.

First failure. We approached a trade show director about teaching the class at an upcoming show. We were asked if we could teach a class of 50. We lied and said yes. She was nice about it, but I could tell she was just being polite.

Second failure. We approached another trade show director at a different show and this time we were prepared with a course description and bio’s. She smiled and thanked us.

Third failure. We approached the second trade show director at the next conference and added a crappy video of our class. This time she looked at me and said, “You’re the gals that teach pet first aid.” Took the video and went on her way.

In all this time, neither of us gave up. We evolved our pitch and worked on our skills, knowing we will teach this. We worked and prepared for that day.

Our first class didn’t come from any of the trade show directors we approached, but rather from different show.

We have since taught pet first aid to thousands of pet professionals.

Look at that picture again. None of us let not winning something stand in the way of moving forward and continuing to contribute to the industry we love. In fact, we ran over to Ren ( show photographer) before the winners even had an opportunity take their photo and made him take it. He thought we were nuts.

What are you failing to succeed at today?

That’s in addition to working full time as a mobile groomer. I will have no problem getting this done thanks to these 6 easy time management tricks.

Tomorrow’s to do list includes working on an upcoming book and a newsletter.