Yucca schidigera is a medicinal plant native to Mexico. According to folk medicine, yucca extracts have anti-arthritic and ant-inflammatory effects. The plant contains several physiologically active phytochemicals. It is a rich source of steroidal saponins. 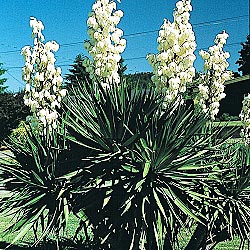 Yucca products have GRAS status, so are FDA-approved for use in humans.

Yucca saponins are as effective as the drug metronidazole in killing tropozoites of Giardia lamblia in the intestine (McAllister TA, Annett CB, Cockwill CL, Olson ME, Yang Y, Cheeke PR: Studies on the use of Yucca schidigera to control giardiasis. Vet Parasit 2001, 97:85-99.).