Did you know there are between 74 and 96 million pet cats in the United States? Depending on their breed and lifestyle, a percentage of these cats will need professional grooming for a variety of reasons. Many cats do an outstanding job grooming themselves, however, if the cat has emotional or physical issues or is unable or unwilling to self-groom, a skillful and talented pet stylist is crucial to the cat’s general health and well being.

I have always been a huge fan of cat grooming. I saw the need early on in my career. I remember standing in the kitchen with a friend looking at a neighbor’s domestic shorthaired kitty thinking to myself, “That cat is in serious need of a good bath,” as I looked at the kitty’s shedding hair. I envisioned the cat after a brush, bath, and dry in a shiny, clean, sleek coat. Upon suggesting some soap and water and a gentle scrub to Mom I heard a familiar comment, “I did not know cats need to be groomed.”

Some cat owners have looked at me, eyebrows raised, with puzzled and skeptical expressions on their faces when I suggest their cats be groomed. On the other hand, many feline owners are open to this concept, agree, and want to learn more.

Aside from all of the health benefits, going through the grooming process in a positive fashion is good training and exposes the cat to handling skills outside of the norm of petting and snuggles. This is beneficial on many levels. Not only is a clean cat more inviting to caress and pet, the cat understands that being touched in unexpected ways such as brushing, drying, and clipping won’t hurt them. Many cats find they enjoy grooming. This can translate into a more cooperative and friendly cat when visiting the veterinarian or when friends, neighbors, or a pet sitter comes calling.

Cat grooming is growing in leaps and bounds in the grooming industry, but there are still not enough cat groomers to go around. The good news is there are more pet stylists, shop, home, house call, and mobile becoming “cat only groomers” everyday. I think it is very fair that cats have pet stylists totally devoted to them, just like those who only groom dogs.

Jan Lewis-Condo has just opened Grooming Angel Pet Salon, a cats-only grooming shop, due to the overwhelming demand for feline grooming that has grown steadily over the past eight years. She used to dedicate every Sunday exclusively to grooming cats, but it wasn’t enough to fill the need. People would have to wait months to get an appointment, and they did.

Although Jenn Dios is presently grooming dogs and cats, her goal is to make her new mobile grooming business, A Smitten Kitten Mobile Grooming, feline exclusive. She loves seeing kitties in her appointment book. Her specialty is helping cats with issues, such as deshedding or mat removal.  Jenn says, “I have a special understanding of cats. I beam with pride and joy, knowing I can be the one to care for them.”

Cat grooming is best done by a stylist who loves, respects, and understands cats. A cat is not a dog by any means. A cat is groomed on its own terms; like it or not!  Many cat only groomers are “cat people,” and have been that way since they were young. They grew up with cats and had many kitties as pets. Many cat groomers do not groom dogs, nor do they want to. That’s fine with me! I am proud to share the grooming industry with cat groomers because we share the same goal: to keep pets happy and healthy.

Ellen Ehrlich is a mobile pet stylist who loves to think, talk, read, and write about pet grooming. Next to grooming, Ellen loves to empower, motivate, and inspire other groomers to be the best they can be. For more information go to:www.gomobileandsucceed.com.

The Face Of Rescue

The Face of Rescue

One Saturday afternoon, a customer of vet tech, Justin Leeanders, was running errands. She was driving over a bridge when she noticed a towel that appeared to be moving. She turned around, parked her car, and went to see what it was. Inside the towel was a tiny, emaciated dog. Someone threw the dog over the bridge, into the river, to drown.

This was not to be!

The woman took the little dog to the animal hospital where Justin works. This picture was taken the day she was brought in. She weighed 2.14 pounds after she was shaved, due to matting. 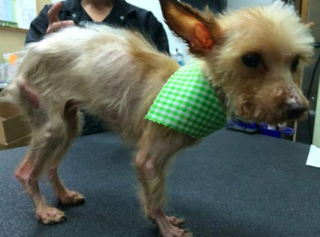 When Justin saw this little dog it was love at first sight. He always wanted a rescue yorkie — a match was made. He named her River. With tender loving care, she began to bounce back, gaining a little over a pound in two days. She gained three pounds in one week and her hair began to grow. River was thriving. Justin was over the moon with his new baby.

He took her everywhere. 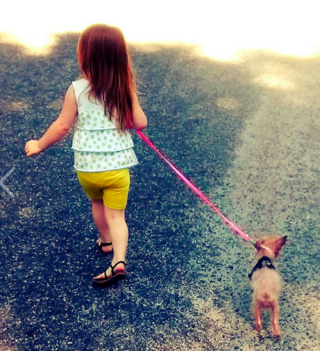 Where ever she went everyone fell in love with her. 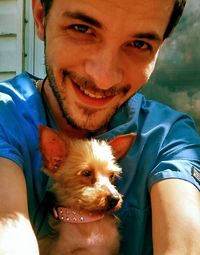 Don’t you just love a happy ending! River, from the river, found a forever home, in the arms of pet stylist Justin Leeanders.

Sandy Blackburn wound up in rescue after her son found a family of orphaned baby opossums in their backyard. Sandy contacted a friend, who is a wild life rehabilitator, for advice.

After falling in love with caring for these babies, Sandy found herself rehabbing a family of baby squirrels. She was hooked!

Then the fun began. Sandy realized this was her calling. She obtained a license in her state as a wildlife rehabilitator. She discovered a non-profit group called Baby Warm. They help rehabbers obtain an incubator to keep the babies warm, as this is a must-have for survival.

When Baby Warm opened a fund for Sandy on the Internet for donations to cover the $450 cost, groomers jumped on this cause and came to her rescue. Sandy had her incubator before she knew it! Sandy now rehabilitates squirrels, opossums, raccoons, and rabbits — just about anything. 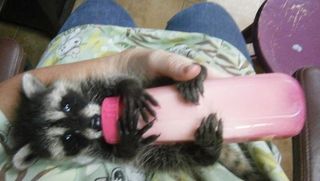 Sandy also runs a Facebook page My Little Slice Of Heaven, where she states, “I run an orphanage for wild critters. I do everything in my power to save helpless animals because it’s a life.” The hardest part is losing a baby to the Rainbow Bridge. It’s heartbreaking because every creature she fosters is important to her. Sandy knows there will always be another that needs care.

A new trend that has grown over the years is incorporating rescue into a grooming competition. It all started with Rescue Rodeo at Atlanta Pet Fair in 2010. Now many shows are on board. The concept is brilliant. Producers couple with rescue organizations to bring dogs to the show to help increase their odds of being adopted.

Participants pay a registration fee and a drawing is held. It’s the luck of the draw as to who winds up on your grooming table. All are in desperate need of a bath and haircut. These shelter dogs are truly a classic “before and after.” 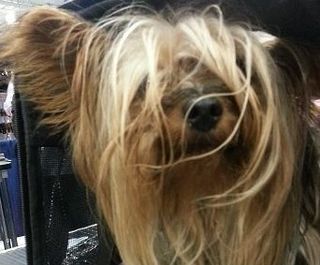 The transformations can be amazing at the hands of a skilled and caring pet stylist. That’s the fun and challenge. Anything goes in the Rescue Rodeo! Lion trim, Asian styling, teddy bear face, lion cut … it’s up to you.  The creative juices flow.

The groomers have a blast! This has gotten so popular that as many as fifty pet stylists groom their fannies off to compete for first place. This is an important cause that is near and dear to everyone’s heart. Those new to competition grooming often jump in and compete for the experience, fun, and camaraderie. Many of the dogs find new homes at the show and go home with a new family. When animal lovers and pet stylists unite and put their heads together everyone wins. 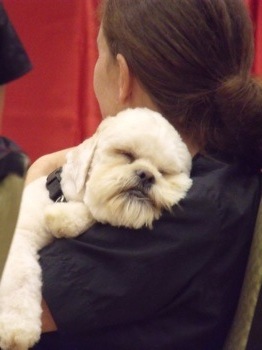 The best part … seeing a snoozing, adorable, adoptable pup on the shoulder of a pet stylist at the conclusion of Rescue Rodeo. Due to Nicole Kallish’s outstanding job, a groomer at the show adopted this little guy. Mission accomplished!

My grooming client Alex Goulet is very special. Losing her seventeen-year-old Border Collie Mix, Rafikki was a heart breaker. I saw Rafikki every six weeks for five years. She was adopted when Alex was in college and was by her side for her wedding and the birth of her three daughters. After Rafikki went to the Rainbow Bridge, Alex could not live without a four-legged friend. It just so happened she had a friend, Tara Nolan, founder of Tails Of Time Dog Rescue. With Tara’s help, Alex became the Mom to not one but two shelter dogs, Pepper and Winfield. 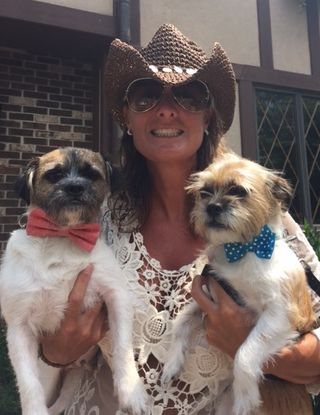 Her family was now complete.

Callie Krakauskas, a family member, got a Dogo Argentino fifteen years ago and fell in love with the breed. She is now the Mom to two rescue dogos, Aspen and Maddox. 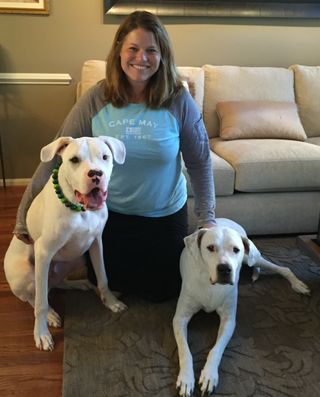 Pet stylists and animal lovers step up when they see a need, whether it be finding pets a forever home, opening their home to a rescue pet, running a rescue, helping animals heal, or returning them to the wild. There’s no better feeling then helping a four-legged creature “get back on his or her feet.” We are all lucky to have many options. Rescue comes in many shapes and sizes. When you love animals, it’s easy to give back and pay it forward, at the same time.

Ellen Ehrlich is a mobile pet stylist who loves to think, talk, read, and write about pet grooming. Next to grooming, Ellen loves to empower, motivate, and inspire other groomers to be the best they can be. For more information go to: www.gomobileandsucceed.com